1:20 New Zealand A to Z - Fishing.  Fishing and collecting seafood are among New Zealand's most popular recreational activities and important parts of our way of life.  A quarter of adult New Zealanders go fishing, whether they're angling for trout, surfcasting at the beach, netting whitebait or fishing from a boat.  On today's programme we have roughly divided the subject up into three broad categories of recreational fishing: for trout, inshore saltwater species and offshore big game fish. Featuring: Trout fishing guide, Lindsay Lyons. Rotorua.  Fishing tackle developer, Paul Barnes. Auckland.  Gamefishing skipper, Bruce Smith. Bay of Islands.

2:10 The Philae Probe Touchdown - Professor Sergei Gulyaev.  After a 64 billion kilometer journey a robotic space probe has landed on a comet for the first time in history.  The Philae probe touched down on comet 67P last night to the jubilation of mission controllers at the European Space Agency - who launched the probe on board the Rosetta spacecraft more than ten years ago.  But the excitement has been tempered by the news harpoons meant to secure Philae to the comet have failed to fire. There have been fears the Philae may have bounced off the surface

2:20 Entangled Whales - Mike Morrissey.  Every year thousands of whales have to be rescued after getting tangled in nets and ropes. Just last week a young humpback had to be cut free near Kaikoura by a specially trained team of volunteers. The Department of Conservation says members of the public often try to free entangled whales themselves. But a DoC ranger and a member of the International Whaling Commission advisory group on whale entanglements, Mike Morrissey, says they often do more harm than good. 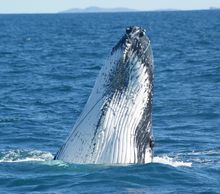 A whale entangled in rope off the Otago coast. Photo: DOC

2:30 NZ Reading.  David McPhail, with episode four of his memoir, The Years Before my Death.

3:10 Diwali and Sattriya Dance - Lynda Chanwai-Earle.  Indian music, food and dance lights up Wellington's Diwali celebrations with a renowned dance troupe visiting from Assam, in northeast India. Lynda learns more about one of India's eight classical dance forms from a renowned performer and leader of this troupe.

3:30 Alpine Fault Drilling - Veronika Meduna.  A New Zealand-led international team of geologists has set up camp in the remote Whataroa Valley on the West Coast to drill 1.3km deep into the Alpine Fault. Veronika Meduna joins them in the field to find out what they hope to learn about the inner workings of the plate boundary and the earthquakes it produces.