Sydney fibre artist Jacqui Fink did a law degree, worked in high-end fashion and raised children before discovering ‘extreme knitting’ in her mid-30s. Her luxurious woollen installations are now sold all over the world. 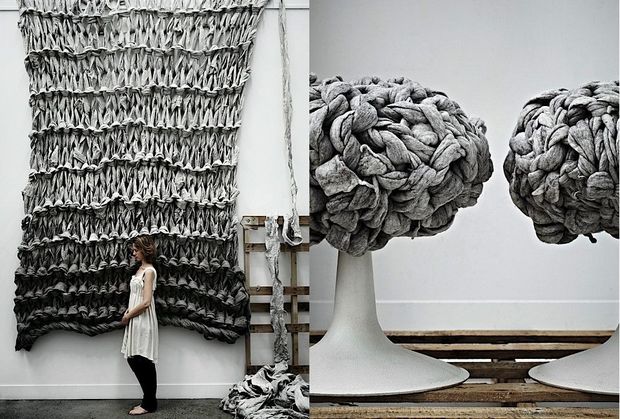 “When I have a full day of knitting ahead I’m in nirvana.”

After her mother had a life-saving lung transplant, Jacqui had a conversation with her about regret – and became determined to explore her own calling.

“I came up with all sorts of crazy ideas and I just threw them out into the world. I didn’t care if people laughed – and they did.”

One night in a dream she received what she describes as a “helping hand from I don’t know what or who”.

“A big loud booming voice came to me and commanded… ‘You have to knit and it needs to be big’.”

Jacqui’s mum had taught her to knit as a child, but she didn’t continue into adulthood and had never ‘cast on and off’ without her mother. After her mum’s lung transplant she taught Jacqui over the phone to cast on and off by herself.

Jacqui knits mostly with merino – “the king of fibres” – on needles that are over a metre long and 50mm in diameter. Her purpose-built K1S1 Extreme Knitting Yarn comes in bales of 200 metres long which she calls 'bumps'.

Extreme knitting means she doesn’t need to go to gym – although it doesn’t work the triceps - and pushing her body to its limits is a very personal challenge for Jacqui.

“I give everything to what I make. I’m wanting to pass on a little bit of comfort to everyone who buys from me.”