Former prison manager, researcher and author explores some of the issues around boys in today's world, and answers listeners' questions. Audio

Former prison manager, researcher and author discusses issues around raising boys. Why is he so belligerent? Tips for dealing with angry adolescent boys. Audio

Former prison manager, researcher and author, Celia Lashlie, discusses issues around raising 13 to 14 year old boys and how they see the world. Audio

Parenting with Celia Lashlie: boys who don't fit in

Author of a confessional book about violent offending, with the author of books about men and violence.

Are mothers to blame for young men dying on the roads?

Former mens prison head, author and social commentator Celia Lashlie says mollycoddling mothers are putting their sons at risk by not allowing them to discover the real world consequences of their actions. 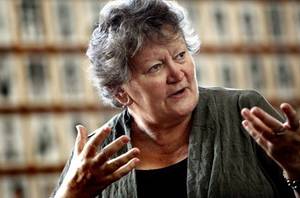 Celia Lashlie's career in social justice began in the probation service. She then worked for 15 years within the prison service, starting in December 1985 as the first woman to work as an officer in a male prison in New Zealand. Her final role within Corrections was as Manager of Christchurch Women's Prison, a position she left in September 1999.

In September 2004, she completed the 'Good Man' project that focused on her research from discussions with pupils in 25 boys' schools throughout the country. The project's aim was to create a working definition of what makes a good man in the 21st century. It formed the basis of her bestseller, He'll Be Ok, Growing Gorgeous Boys into Good Men. At the time of her cancer diagnosis , Celia was about to begin writing for an updated edition of this book to celebrate its 10th anniversary.

She has also written two other books; The Journey to Prison: Who Goes and Why and The Power of Mothers: Releasing Our Children.

She was the mother of two adult children and 'Nana' to five grandchildren.