Ebola may soon be a "preventable and treatable" disease after a trial of two drugs showed significantly improved survival rates, a scientist says. 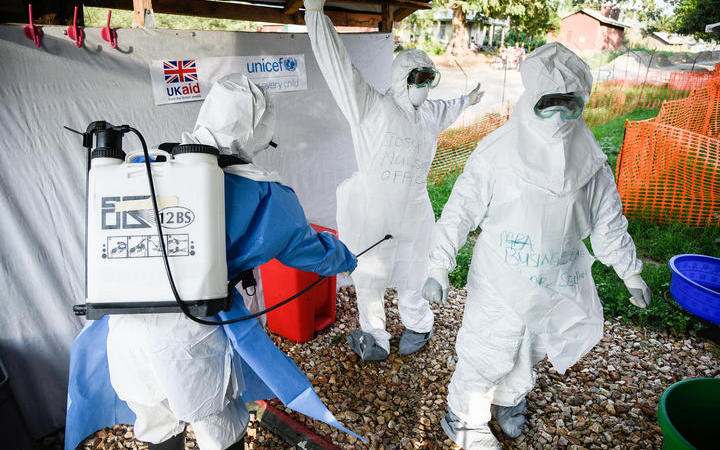 Medical staff at an Ebola treatment unit get ready to work in Bwera in the Democratic Republic of Congo. Photo: AFP

New antibody based treatments with a success rate of up to 90 percent are set to become a game-changer in the fight against the deadly viral disease.

A recent outbreak in the Democratic Republic of Congo that began in August last year has killed more than 1800 people.

A Cambridge University virologist Dr Chris Smith hopes these new experimental treatments will be able to contain the latest outbreak.

He told RNZ's Saturday Morning the monoclonal antibody drugs invented in Cambridge use existing antibodies in the body to fight the disease.

"They're pieces of protein that float round in your bloodstream made by immune cells and they're sticky ... and the stickiness enables them to bind onto certain targets and those targets in a

monoclonal antibody are all identical and this means you can make almost like a magic bullet.

"You can programme the antibody to target one thing - in this case they're targeting the surface or the coat proteins of the Ebola virus."

This means that if you catch someone with the virus early and give them "a big slug" of the antibodies they will cruise around the body and target the Ebola virus and glue themselves onto it, neutralising the virus so it can't get into cells and propagate the infection, Dr Smith said.

Earlier this week, Jeremy Farrar, director of the Wellcome Trust global health charity, told the BBC the treatments would "undoubtedly save lives".

The findings, Mr Farrar said, indicate scientists are getting closer to turning Ebola into a "preventable and treatable" disease.