New York City has declared a public health emergency over a measles outbreak centered in an ultra-Orthodox Jewish community and ordered mandatory vaccinations in the neighbourhood. 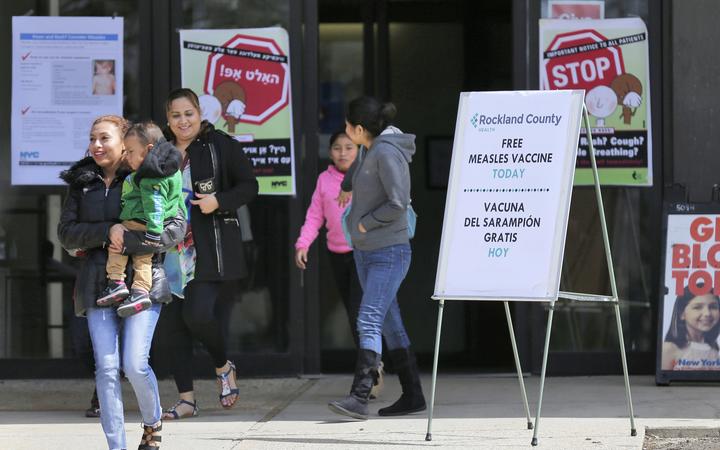 Mayor Bill de Blasio announced the unusual order amid what he said was a measles crisis in Brooklyn's Williamsburg section, where more than 250 people have gotten measles since September. Officials blamed the outbreak on "anti-vaxxers" spreading false information.

The order applies to anyone living, working or going to school in four ZIP codes in the neighborhood and requires all unvaccinated people at risk of exposure to the virus to get the vaccine, including children over six months old.

The city can't physically force someone to get a vaccination, but officials said people who ignore the order could be fined US$1000 ($1325). The city said it would help everyone covered by the order get the vaccine if they can't get it quickly through their regular medical provider.

"If people will simply co-operate quickly, nobody will have to pay a fine," Mr de Blasio said.

In New Zealand, one case of measles was confirmed in Mount Maunganui on Monday.

Cases have also been confirmed in Auckland and Christchurch.

Ordering people to be vaccinated without their consent is "an extreme measure, which is not provided for in the law and raises civil liberties concerns about forced medical treatment," Donna Lieberman, executive director of the New York Civil Liberties Union, said in a written statement.

The majority of religious leaders in Brooklyn's large Orthodox communities support vaccination efforts, said the city's health commissioner, Dr Oxiris Barbot, but rates have remained low in some areas because of resistance from some groups that believe the inoculations are dangerous.

"This outbreak is being fuelled by a small group of anti-vaxxers in these neighbourhoods. They have been spreading dangerous misinformation based on fake science," Barbot said.

"We stand with the majority of people in this community who have worked hard to protect their children and those at risk. We've seen a large increase in the number of people vaccinated in these neighbourhoods."

Officials also noted that Passover is approaching, meaning increased travel among people who could carry measles to or from New York. Israel, for instance, also has a current measles outbreak.

The commissioner is empowered by law to issue such orders in cases when they might be necessary to protect against a serious public health threat.

News of the order got a mixed reaction in Williamsburg, with some residents - even those who support vaccination - saying they felt uncomfortable with the city pushing vaccines on people who don't want them. Others remain convinced, against expert assurances, that vaccines are unsafe.

"And it's everybody's option to do what he wants. What he decides."

Earlier this week, the city ordered religious schools and daycare programs serving that community to exclude unvaccinated students or risk being closed down.

Rabbi David Oberlander, director of the Yeshiva Kehilath Yakov School, where there were 20 measles cases, said "maybe 3 percent" of the students were unvaccinated.

"However, we worked very hard, as the health department told us, and those children were excluded," he said.

Another Jewish religious community, north of the city but with close ties to Brooklyn, has also seen a surge, with at least 166 cases since October. Last week, a state judge blocked an attempt by Rockland County officials to halt the spread of measles by banning unvaccinated children from public places.

The Centers for Disease Control and Prevention recommends that all children get two doses of measles vaccine. It says the vaccine is 97 percent effective.

Measles is a highly-infectious viral illness spread by contact with respiratory secretions through coughing and sneezing.

People are infectious from five days before the onset of the rash to five days after the rash starts.

Infected persons should stay in isolation - staying home from school or work - during this time.

The best protection from measles is to have two MMR vaccinations. MMR is available from your family practice and is free to eligible persons.

People are considered immune if they have received two doses of MMR vaccine, have had a measles illness previously, or were born before 1969.

Anyone believing they have been exposed to measles or exhibiting symptoms, should not go to the ED or after hours' clinic or general practitioner. Instead, call the GP first.