A recording of a fight between a man and the New Zealand woman he is accused of murdering in Queensland suggests she was "choked or strangled in some way", a court has been told.

Gold Coast man Gable Tostee today pleaded not guilty to murdering Warriena Tagpuno Wright, on the opening day of his trial in the Supreme Court in Brisbane. 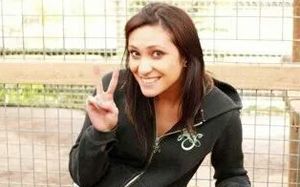 Ms Wright, 26, was found dead at the base of a Surfers Paradise apartment block in August 2014.

Mr Tostee, 30, was living in the apartment at the time.

Crown prosecutor Glen Cash told the jury Ms Wright and Mr Tostee first made contact on the dating app Tinder while she was visiting Australia.

They arranged to meet on Thursday 7 August around 8.45pm, went to a bottle shop to buy beer and then went to Mr Tostee's apartment.

Mr Cash said over the next few hours the pair drank alcohol and were intimate before an altercation occurred in the early hours of Friday morning.

A key piece of evidence was an audio recording of the events leading up to Ms Wright's death, made on Mr Tostee's phone, he said.

Of particular interest was the altercation that happened prior to her being locked on the balcony.

Mr Cash said the recording would be played and included noises "consistent with her being choked or strangled in some way".

The court would "hear noises of her screaming, shouting 'no'," he said.

"The defendant was inside the apartment having locked Warriena outside on the balcony.

However, the Crown said, Mr Tostee did commit a life-threatening act by assaulting Ms Wright and locking her on his balcony, causing her to fear for her life and try to escape.

Mr Cash said Ms Wright had no other means of escaping other than climbing over the balcony, and she fell to her death when she tried to do so.

He told the court there was no evidence this occurred, arguing Mr Tostee had merely restrained Ms Wright in self-defence.

Mr Holt said during the altercation Ms Wright had become "increasingly erratic" and had thrown rocks at Mr Tostee and hit him with parts from a telescope.

Mr Holt said Mr Tostee had repeatedly asked Ms Wright to stop and asked her to leave, and the recording would show that.

He said it was within the law for someone to use reasonable force to defend themselves or their property.

"It is a desperate tragedy that Warriena Wright died," Mr Holt said.

"This is a case where what happened is relatively straightforward."

More than 20 witnesses are expected to testify before Justice John Byrne.

Mr Tostee was granted bail in November 2014 on the condition he would live with his parents, refrain from using online dating sites and receive treatment for a diagnosed alcohol problem.

Since being charged with Ms Wright's murder, Mr Tostee has served 10 months behind bars for a high-speed police pursuit which took place after a music festival in Byron Bay in July last year.

The trial is expected to last seven days.