Rescuers are searching for hundreds of migrants in the Mediterranean after a boat carrying as many as 600 people capsized off the coast of Libya. 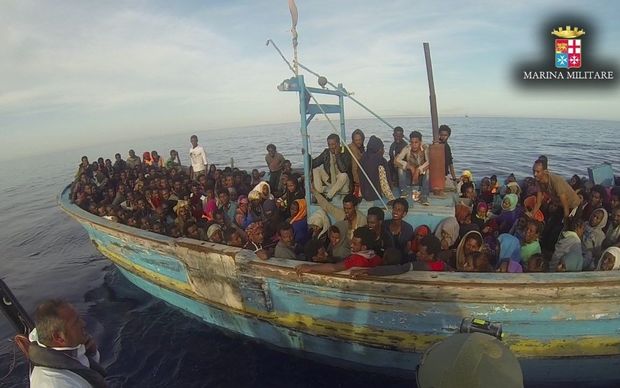 Thousands of migrants have been rescued in the Mediterranean by the Italian coast guard this year. Photo: AFP / Italian Navy / Anadolu Agency

But the Italian coast guard and the UN refugee agency said about 400 had been rescued and 25 bodies recovered so far.

More than 2,000 migrants are believed to have died in 2015 trying to cross the Mediterranean to reach Europe.

A distress call was picked up in Sicily and one of the first ships on the scene was an Irish navy vessel. But as she launched her boats, the migrants apparently moved to one side of the fishing boat, causing it to capsize.

At least three other ships and three helicopters were reported to have arrived in the area shortly afterwards.

He said survivors had indicated that between 400 and 600 people were on board the boat when it capsized.

Melissa Fleming, a UN refugee agency (UNHCR) spokeswoman, said about 100 people are thought to have been travelling in the boat's hull at the time, adding: "The boat capsized very fast".

The humanitarian medical aid organisation Medecins Sans Frontieres (MSF) said its Dignity I vessel was at the scene and two more of its boats were on their way to the area.

It said the same vessel had also been involved in another rescue operation earlier on Wednesday, in which about 100 migrants were rescued.

The Mediterranean Sea is the world's most deadly border area for migrants.

In April, a fishing boat carrying about 800 migrants sank off the coast of Libya in what the UN called the deadliest incident in the Mediterranean ever recorded.

Earlier this week, the IOM warned that the number of migrants attempting to cross the sea is much higher than in the same period last year.