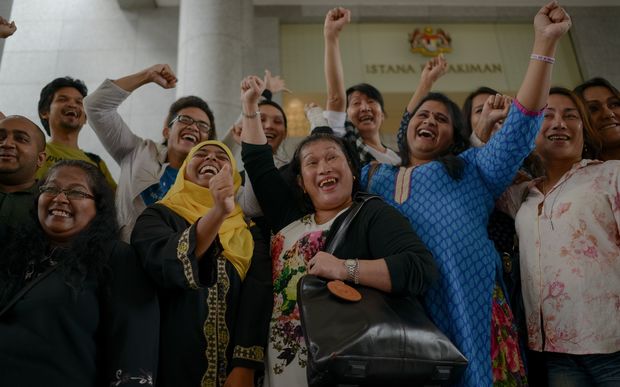 Transgender activists celebrate outside the court of appeals in Putrajaya. Photo: AFP

The appellants' lawyer said the ruling in the religiously conservative country would be "historic".

"This will be a precedent. This court binds all other high courts," Aston Paiva was quoted as saying by AFP news agency.

All Muslims in Malaysia are subject to Islamic laws, under a double-track legal system.

Men dressing or acting as women is illegal under those laws, with offenders facing jail terms of up to three years. Some states also forbid women dressing as men.

The appellants, all Muslims who were born male but identify as women, were arrested four years ago.

The BBC reports that they said they had been assaulted by Islamic officers and jailed for wearing things like hair clips.

In 2012, a lower court ruled that they were born male so they had to wear men's clothing.

The women did not appear in court but one told the AFP news agency by telephone: "I am happy we won the case. I feel more relaxed now."