North and South Korea have agreed to resume formal high-level talks that had effectively been suspended since February, reports from South Korea say. 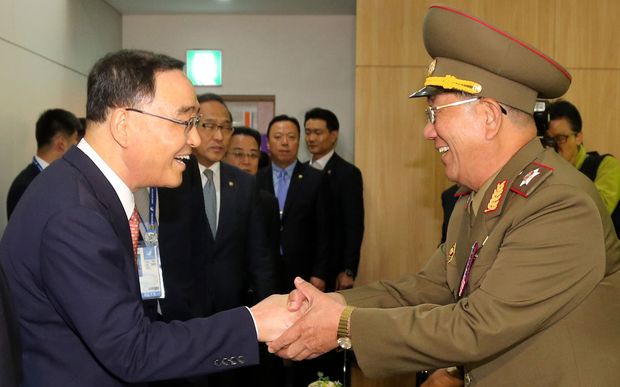 The agreement came during a surprise visit to South Korea by North Korean officials for the closing ceremony of the Asian Games, the BBC reported.

Both sides were said to have agreed to meet again within the next few weeks.

Hwang Pyong-so, seen as the second-most powerful man in North Korea, held talks with Ryoo Kihl-jae, the South's reunification minister, after flying to Incheon to attend the sporting event.

Mr Hwang is the top political officer at the Korean People's Army.

It is not known what was discussed at the meeting and neither party has commented publicly on the talks.

A change of tack

The BBC's Stephen Evans in Seoul says the talks are something of a breakthrough given the level of insult thrown at the South by the North in recent years.

Relations between the two have been practically non-existent for four years, but the North's economic troubles seem to have forced a change of tack, our correspondent adds.

The two Koreas remain technically at war because the 1950-53 conflict was ended with a truce.

The surprise meeting comes amid ongoing speculation about the health of the North's leader.

Mr Kim has not been seen in public since 3 September.

Meanwhile, North Korea's ambassador to the UN, So Se Pyong, said that the country was ready to resume talks on its nuclear programme.

In an interview with Reuters news agency, Mr So also said the North was not planning any missile or nuclear tests.

North Korea pledged to abandon its nuclear programme in 2005, but it has been conducting missile and nuclear tests since the negotiations broke down in 2008.