Let's be honest, not a lot happens at the Olympics on Day One for us amateur Olympic watchers.

Of course there is lots of sport except it is mostly heats and repechages and first bouts and initial phases and early plays. 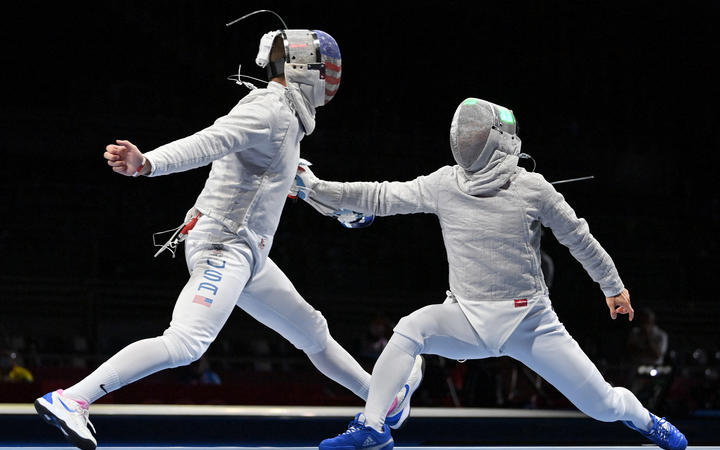 The medals are few and the big sports are yet to fire. That'll all come later when the Americans are in the pool, Lisa Carrington is in her canoe and gymnastics is in full swing.

But Sky Sport has dedicated 12 channels to the Olympics so is determined it is all going to be exciting.

"It's going to be an exciting day," said our commentator.

Check out all our Olympics coverage

While we waited for the excitement to start, we were shown travelogues.

There were pictures of happy Japanese in the towns surrounding Tokyo, where events would be held.

"They love shopping here," said our narrator as people in kimonos shopped.

"This town is famous for its Buddhist temple."

We moved onto another town. It, too, had good shopping, kimono and famous Buddhist temples.

Over on the fencing channel nothing much was happening. We watched two empty rectangular stages, lit by fluorescent lights.

"They're known as pistes in fencing," said our commentator, as if sensing our thoughts. Behind, the stands were darkened to hide the lack of spectators.

In the foreground, two blokes leaned against the judge's table passing a piece of paper back and forth. What sounded like national anthems performed by heavy metal bands played. Then a movement.

'We're about to shift gears now," says the commentator excitedly. "It's the men's sabre."

It's fast and furious fencing. Introductions can take longer than the bouts.

"Blink and you'll miss it," laughs our commentator excitedly.

First up Andrew Mackiewicz, of the USA, ranked 95th in the world against Tomohiro Shimamura, 34th. Shimamura from Tokyo would have been hometown favourite if there had been crowds. The American had a natty helmet with the US flag on it.

"We have a few gremlins on the blue piste," says our breathless host, excitedly.

The wireless equipment isn't working. The fighters keep prodding each other listlessly to test if their sensor is working. Officials come and go, saying things.

They have to change their gear.

Our men walk around like firefighters in a Hazmat suit.

"We are good to go, the calm before the storm. The fencing has started," intones our commentator.

Sixteen minutes later, we have had 28 bouts, a flurry of parries and thrusts. Mackiewicz wins 15-13. He takes off his helmet and screams into the void of the stadium. Shimamura looks on, then walks off.

We go to the ads. The Brady Bunch. It looked quite exciting.

Over on another channel there was the men's cycling road race, featuring New Zealand hope George Bennett.

"This race will show who is the fastest rider on the course today," explains our Sky commentator. 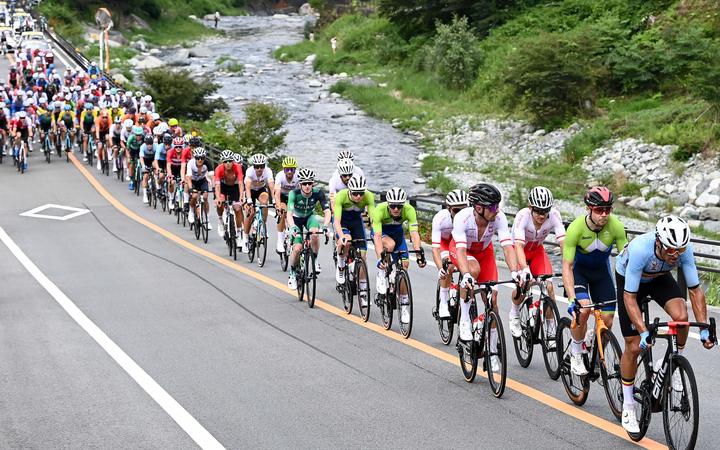 The commentators talked; the cyclists dropped back to talk to their coaches in the following cars; the Japanese watched; the peloton chatted. Nothing much happened.

"Nothing really happening in that peloton," said the commentator dolefully, trying to be excited.

It was hot. The cyclists kept asking for water or ice to put down their back.

Every time a camera went past, the cyclists all waved and smiled.

"This is what is so special about the Olympic Games," said the commentator excitedly.

Then it was back to watching the peloton, chatting. At the back a rider from Spain seemed to be swapping numbers with a rider from Austria.

The commentators discussed the width of the tyres - 25mm max.

"They have good roads in Japan," noted our commentator, excitedly.

"George Bennett is tucked in there nicely," said the other, excitedly. He remained tucked.

A British rider fell off. The Belgians seemed to dominate. Still 151km to go. We got news that the first gold medal of the Games had been won - Qian Yang of China took the 10m air rifle in shooting. She is apparently a rising star; it sounded exciting.

The siren call of the other Olympic channels became irresistible. On TVNZ, there was men's gymnastics. Back on Sky, a Turkish man in red was boxing a Belarusian in blue. "They're both taking a bit of a breather here," said the commentator.

On the next channel there was a rerun of Yang's medal. Before each shot she closes her eyes, goes inward, utterly still before opening her eyes and gazing down the sights. It is enthralling.

"Now we're in the hills, it is getting very, very exciting," said the excited commentator.