Javelin thrower Holly Robinson is bursting with pride after adding to New Zealand's gold medal tally at the Tokyo Paralympics. 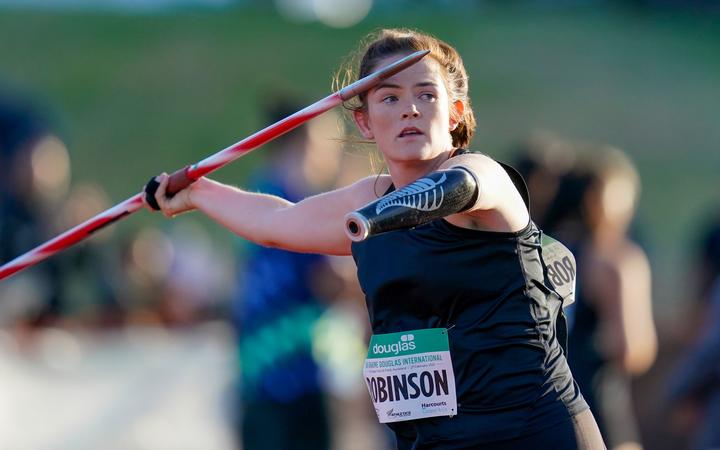 The Dunedin-based, Hokitika-raised athlete saved her best for last to clinch gold in the F46 category with her sixth and final throw on Friday night.

Robinson threw 37.46m with the first of her six attempts on Friday, a 38.68m in her second throw followed by a no throw on her third.

The 26-year-old improved to 38.75m on her fourth, dropped to a 38.40 with her second to last throw and as the rain came down heavier Robinson's last throw of 40.99m sealed her first Paralympic gold.

"Honestly that last throw I couldn't quite believe it," Robinson said.

"Realising in that moment that was the gold medal, it is just something I have wanted for so long and it is finally here. I'm so happy and so proud of myself and my team for helping me get here.

"I have so many times in competitions thrown good throws got up to number one and then been beaten. So I was just waiting for that last throw to go and once it was gone it is just a moment you never forgot."

Robinson said the gold medal was the culmination of a long journey to the top.

The success came after a string of second-place finishes at major events, including the 2016 Paralympics in Rio.

"I've been fighting and fighting for this for so long.

"[Competitions] of late have not gone that well for me and then we had Covid hit. Getting that gold means a lot because we have worked so hard to get it...

"I'm really proud of myself for bringing it out on the last round and managing to get that gold."

Noelle Roorda of the Netherlands threw a personal best of 40.06 metres for the silver medal and Great Britain's Hollie Arnold took bronze with a top throw of 39.73.

Arnold had been in the lead for most of the rounds, until Robinson's sixth throw and Arnold who was throwing last couldn't match the New Zealander's distance.

Robinson's medal was New Zealand's second on the penultimate day of competition in Japan.

Tokyo is Robinson's third Paralympics. She won the silver medal at the last Paralympics in 2016 in Rio.

In March Robinson wrote herself into the record books when she became the first Para athlete to win a medal in an open event at the New Zealand Track and Field Championships, taking silver in the women's javelin.