New Zealand Paralympian Anna Grimaldi has leapt to the gold medal in the T47 long jump at the Tokyo Paralympics. 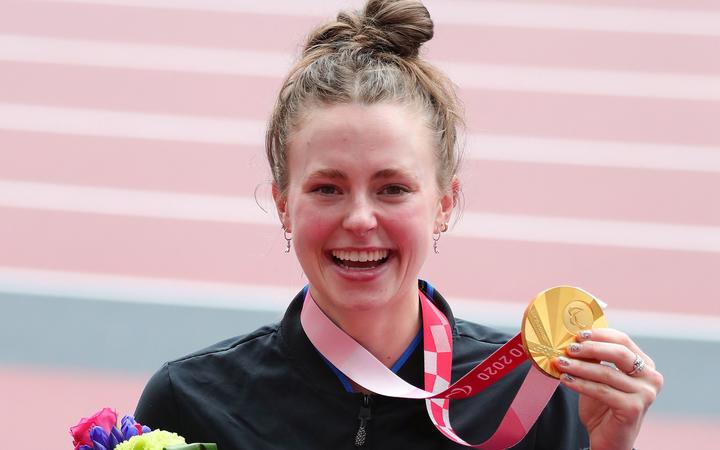 Grimaldi set a Paralympic Record with her first jump of 5.74 metres in the wet conditions.

She recorded a no jump in her second and third of six attempts, but extended her lead with a jump of 5.76m in her fourth jump and couldn't better it on her fifth and sixth leaps.

Grimaldi, 24, from Dunedin was the defending champion in this event after winning gold at the last Paralympics in Rio five years ago.

Heading into the delayed Paralympics in Japan, Grimaldi said she was wary of the newcomers in the event, but she went into the final with a 31 centimetre advantage over her nearest rival.

After claiming gold Grimaldi said: "I'm in a whirlwind. There has been so much that has gone into this for the past five years and I owe a lot to a lot of people. I hope I did them proud out there.

"The weather wasn't ideal, but I got stuck in. It has been a huge five years and I just feel the weight of the world has lifted off my shoulders.

"The plan was to go in with a safe jump and not foul my first jump, so I'm stoked that I didn't (and set a Paralympic record) and that helped me relax. But in saying that I was not that calm.

"In Rio I won by accident but here I did it on purpose. I've changed as a person, and I hoped it is obvious to people watching how different I am. I'm really proud."

Also in action on Friday at Japan's Olympic Stadium is Rio silver medalist Holly Robinson in the F46 javelin just before 10.30pm.