The All Blacks return to familiar territory for Saturday's Rugby World Cup semifinal against England and the fans are already there debating the merits of their teams. 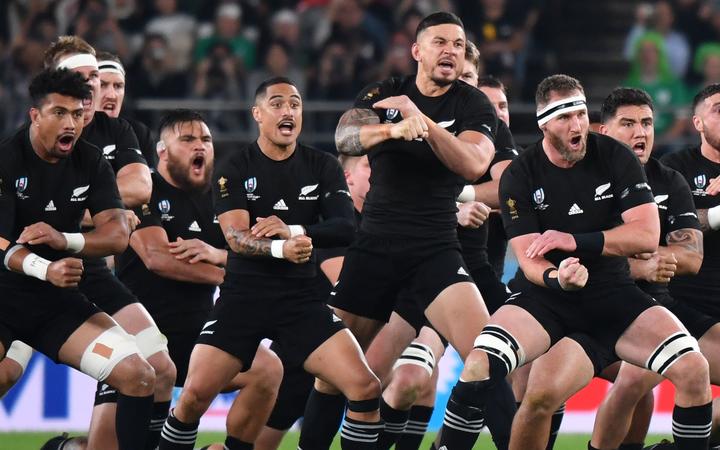 The host city for New Zealand's opening pool match against South Africa, Yokohama is also the venue for both semifinals and next weekend's final.

About an hour south of Tokyo by train, the city is birthplace of rugby in Japan, with Asia's first club established there more than 150 years ago.

It's also the city where the All Blacks hope to clinch a third straight World Cup crown, should they make the final.

Having travelled all the way from Tokoroa hoping to watch the All Blacks lift the World Cup, Rex is one of many Kiwis set to flock to Yokohama over the next two days.

"Well, we watched the quarter finals and were impressed and thought 'let's go'. We're looking forward to the semifinals. But if we don't make the finals well then we're selling the tickets; hopefully to a Pom with lots of money."

But it won't just be black jerseys, with fans from England, South Africa and Wales also in town to support their teams.

Springboks fans Willem and Suzanne from Johannesburg are confident their side can not only beat Wales, but go all the way.

"Every 12 years it's our turn. So it's turn again," Suzanne said. The Springboks won 15-12 in extra time in 1995 with an epic encounter in front of President Nelson Mandela.

Twelve years later they beat France, who had upended the All Blacks in the quarter-finals, 15-6.

English fans are also feeling optimistic after their thumping quarterfinal win over Australia, 40-16.

Mike from South London has a message for Kiwi supporters.

Joe from London is in Japan with his father Kevin for the tournament.

He says England's convincing victory over Australia filled them with confidence, but not for too long.

"We were confident, until we saw the Kiwis' performance. It was very strong, so hopefully it'll be a good game.

"Eddie Jones the England coach always [has] good tactics, so he'll find something to try to rile them before kick-off anyway."

Jones is already doing his best, saying all the pressure is on the All Blacks, leaving England to relax and enjoy the week.

And Rex from Tokoroa was happy to allow them that.

"Yeah, well they can enjoy the week and then fly back home on Sunday or Monday or whatever day they head back.

"You don't listen to Eddie, mate, he's a typical Aussie."

Nevertheless, Jones has added more spice to what was already a mouth-watering match-up.

The atmosphere inside Yokohama Stadium - which can seat 75,000 - is also set to be electric.

"I hope we can hear the haka this time," Charlotte said.

Kayne says that Kiwi crowds tend to be quieter.

"Hopefully they don't get on top so we have to listen to Swing Low (the unofficial English anthem, Swing Low Sweet Chariot) too long."