Scott Barrett will start for the All Blacks when they take on England in this weekend's semifinal clash at the Rugby World Cup. 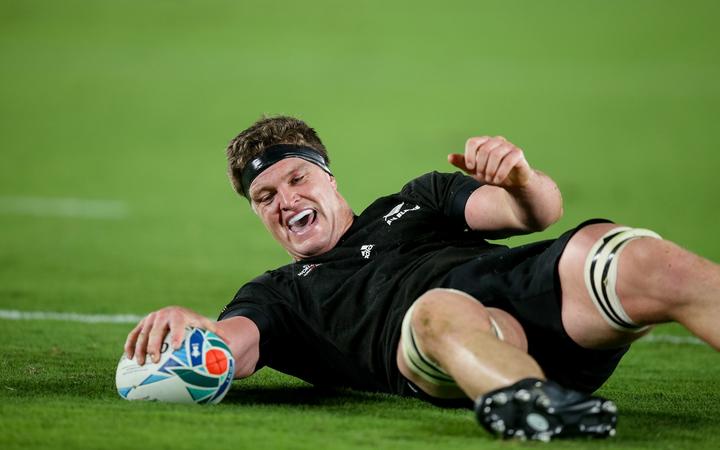 Scott Barrett goes in for a try during the All Blacks' first Rugby world Cup 2019 match against South Africa. Photo: PhotoSport

The All Blacks have this afternoon named their team for this Saturday's game.

Scott Barrett will start as blindside flanker for the first time.

The move means Ardie Savea takes the No 7 jersey, with Sam Cane dropping to the bench, taking the place of the injured Matt Todd.

"His inclusion will be to counter the size and strength of the England pack, they're very strong defensively and have pushed other teams around at set piece so Scott Barrett, who is naturally a lock, offers a better lineout option than Ardie Savea or Sam Cane.

"Barrett also provides more grunt in the scrum and again more grunt when it comes to the breakdown with a bigger more physical body and is more niggly than a traditional fetcher like Cane.

"His bulk will be needed against a brutish England pack who will be attempting to slow down the All Blacks ball."

The selection of Scott Barrett means he will start with brother Beauden at kick-off, with other brother Jordie set to come of the bench during the game.

With Scott Barrett starting, Patrick Tuipulotu comes into the reserves as lock cover.

Midfielders Anton Lienert-Brown and Jack Goodhue are backed up Sonny Bill Williams, while Jordie Barrett gets the spot as outside back cover ahead of Smith.

Codie Taylor gets another start at hooker, with Dane Coles in the reserves.

All Blacks head coach Steve Hansen said there was "no doubt that this is a huge game".

"We know what we have to do and we've had a great week's preparation. The team is exactly where we want to be, mentally and physically, ahead of the weekend.

"We're really looking forward to this opportunity. It's all about this game and the moments it will bring. In these moments, the word pressure is bandied around quite readily. However, that pressure is always there whenever you play quality opposition, regardless of who you are. It's about how you handle that in the moment and not getting distracted by the past or the future."

The two teams have played each other 41 times, with the All Blacks winning 33 times, England seven times and the one draw. The last result was a 16-15 win to the All Blacks at Twickenham in November last year.

Read will be captaining the All Blacks for the 51st time, equalling All Blacks hooker Sean Fitzpatrick.

England will name their team later this afternoon.

The matchday 23 (Test caps in brackets):