Canterbury have dominated the Farah Palmer Cup competition this season and another win on Saturday will lock up a third straight national title. 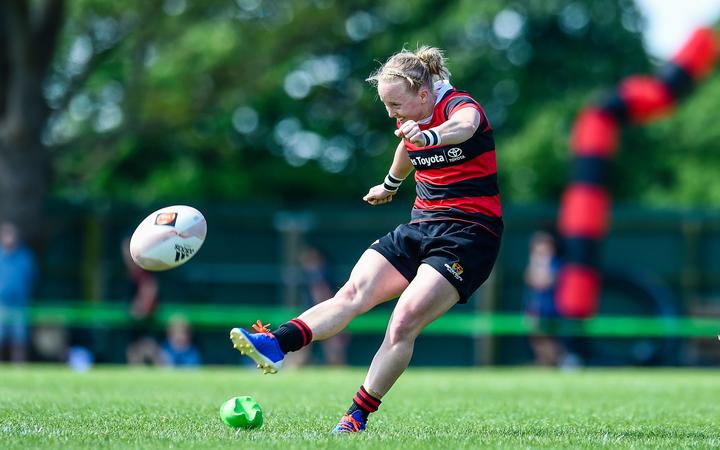 To add to their women's provincial rugby legacy, Canterbury need to get past the Auckland Storm in the final at Christchurch's Rugby Park.

Canterbury players have not spoken much about a potential three-peat according to veteran halfback Kendra Cocksedge, but she said getting another trophy in the cabinet would mean a lot to the province.

Auckland go into Saturday's showpiece event as underdogs. The last time these two sides met, in week two of the competition, Canterbury won by 33 points.

However, Cocksedge, who missed the earlier match against Auckland on Black Ferns rest, expects a closer result in the final.

"Auckland have obviously been in a lot of finals in the past as well and anything can happen in finals footy," she said.

"We don't really want to look at what has happened in the past, we've got to look at going forward and we know it is going to be a different game, we know they are going to come at us and we've got a target on our back."

For Auckland captain Linda Itunu and Black Fern Eloise Blackwell the final marks a milestone as both players bring up their 100th first-class matches.

Auckland coach Richie Walker has named an unchanged line-up from his side's semifinal win over Wellington.

"I must take my hat off to the experienced girls who have welcomed the younger ones with open arms and really helped them," Walker said.

"The culture has been really impressive in allowing those young girls to continue to grow, but in the tough moments it has been the experience of some of those older players that have got us through, and that's something we saw against Wellington in the semi-final."

The 13-team Farah Palmer Cup competition could expand, with Southland looking to enter a team, but this season a few teams have been a long way ahead of the rest of the competition.

Canterbury have been undefeated in 2019 and have had several big wins, however Kendra Cocksedge anticipated closer games in the coming seasons.

"It is a big jump from women's club rugby to the Farah Palmer Cup but I think having both the Championship and Premiership has helped that slightly and there are provincial unions out there that have put in teams and they are striving to become better," Cocksedge said.

The experienced Black Fern also supported the competition as a pathway for developing the next generation of national representatives.

"Having the Black Ferns development squad [selected from the competition] is going to add another little carrot to dangle in front of people that really want to excel forward in becoming a Black Fern."