Whangarei people marched in big numbers last evening to show their support for a woman attacked as she jogged around the city's Hatea Loop. 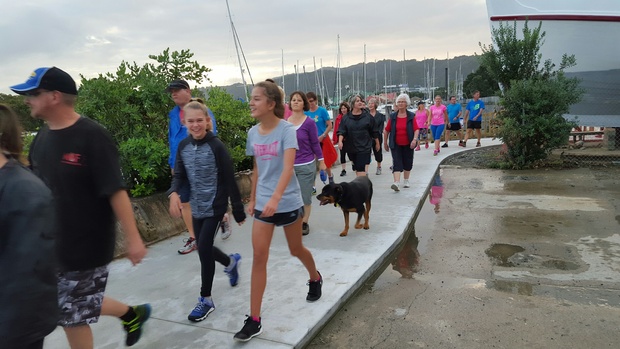 The 20-year-old has needed surgery after she was abducted and assaulted in the early hours of Friday morning.

A 40-year-old man has been charged with her abduction, sexual violation and injuring with intent.

The incident has shocked and angered the Whangarei community and there have been hundreds of responses to Facebook appeals for support for the woman.

At sunset yesterday a stream of marchers - estimated at more than 2000 - poured onto the Hatea Loop in a bid to reclaim it as a safe public space and show solidarity with the victim.

Tom Muller, who operates a boatyard not far from the scene of assault, said the attack was unacceptable.

"We run this yard here, and it's pretty devastating to know that something happened so close, and we just want to show our support," he said.

"To tell the guys that contemplate something like this, that it's not on."

Another marcher, John Allen said he was walking to show support for the young woman.

"And to reinforce our feeling that this is our town and we will not be intimidated," he said.

"And we will not allow these sorts of people to change our love for this place."

One man - who gave his name just as Maurice - did the Loop slowly and painfully on crutches.

"This is in support of the young lady who was assaulted last week," he said.

"Whangarei is such a small community, but it's really good to see everyone come together in support for the victim of something horrible like this. I hope she gets to see this and all the support for her."

In the two years since the Hatea Loop's been open, it's become everyone's favourite circuit.

It's central, it's attractive, it's not too gruelling, and you can reward yourself with a coffee or beer at the end - at the Town Basin.

At weekends especially, it bustles with families, walking and running groups, children on scooters, Mums with pushchairs; dog walkers and cyclists. People greet each other as they pass.

It's Whangarei's version of the traditional passeggiata. And until now, women exercising alone, have felt it was safe. Even at night. Friday's attack has changed that.

One woman who sometimes ran alone at night, said she would no longer do so.

"It was heart-breaking to hear about the attack," she said.

"Devastating. I can't believe such an awful thing could happen in our community. Most of the time you feel pretty safe so it's been pretty shocking to everyone."

The women's running group that organised the march is determined not to let that shock deter women from using the Loop.

A member, Jane Frazerhurst said women should be able to run alone - day or night - but running in pairs or groups was the safer option.

"A lot of us run often, early in the mornings. It could have been any one of us," she said.

"We were planning our run the next day, after the attack and one of the girls said, I don't want to run the Loop and we said, that's not how it should be and that's why we organised the march, as a show of strength."

Corinne Austin, the Whangarei personal trainer whose Facebook appeal for support for the march went viral, was rapt with the huge response.

Marchers donated hundreds of dollars for the victim of Friday's attack, who was taken to hospital after she was dumped off, badly injured, in town.

The man alleged to be her attacker appeared in the Whangarei District Court on Saturday and has been remanded in custody.