A spray paint attack, by masked taggers, on a crowded Auckland passenger train is the latest in a series of similar incidents.

Passengers choked on spray fumes which entered the carriage during the incident last evening during a stop between Britomart and Newmarket. 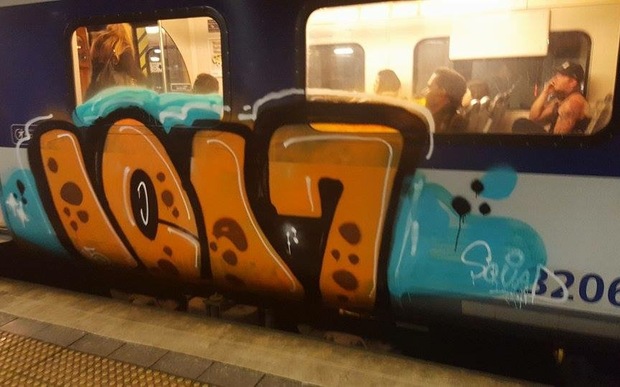 An image posted by a passenger appears to show the tagged train. Photo: FACEBOOK

Those inside watched as a group wearing ninja-style headgear painted the side of the evening service on the western line. The incident happened just before 7pm.

Danni Bett, a passenger on the train, said it stopped between stations without warning.

"We were just sitting, just out of the blue, and this smell of gas or paint came through the train," she told Morning Report.

"People looking out saw these guys with black ninja-like masks on with just eyes showing, so it was a little bit freaky.

"We noticed they were tagging the train and people inside were coughing. I banged on the side of the window. People were in tears because they couldn't breathe.

"The whole carriage was full [with fumes], we were all having issues breathing."

She said people were trying to get the train doors open for 15 minutes.

"Then [the taggers] started taking photos of the train, and after about 15-20 minutes they left."

Auckland Transport said the incident was the third to occur at signals on the Newmarket side of the Parnell tunnel, and CCTV cameras had been installed after the first two attacks.

"We pulled the CCTV footage and passed it to the police, who are investigating," said the agency's rail services manager, Craig Inger.

"It's very hard in these situations as people are wearing balaclavas," he said.

"We are working with KiwiRail on possible fencing off known graffiti areas, and over the last two to three months we've tightened security in train stabling areas."

He said the taggers were very organised, with usually four to five in a group, and sometimes up to 10.

"They will do a lot of damage in a short period, up to two to three minutes and they're done."

The agency said there was a big safety risk for anyone near the tracks.

The agency had previously referred to a group dressed as ninjas tagging a train outside Britomart in March.

A report on train disruptions for that month refer to four instances where tagging has caused trains to be removed from service.

One incident on 2 March was described as "heavy tagging of service while waiting at signal at Newmarket".