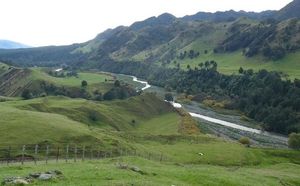 Four councillors walked out of a council meeting today in protest against a decision by the other five councillors to keep the amount of additional funding secret.

The dam project is being held up by a High Court challenge, with the investment company needing more money to operate past September when its current funding runs out.

Councillors Tom Belford, Rick Barker, Peter Beaven and Rex Graham left the meeting, saying there was no good reason why the funding should be kept secret.

Mr Belford said they are fed up with the secrecy surrounding the project and ratepayers have a right to know what their money is being spent on.

"The secrecy prevents me as a councillor from representing what's going on to my constituency. I can't front up to them, I can't discuss anything I would learn in a secret session - so what's the point."

Mr Belford says regional councillors are essentially being gagged from talking about anything of substance to do with the dam.

Chairman Fenton Wilson, who was among the five councillors who voted to keep the funding secret, has been unavailable for comment.