The Government says no decisions have yet been made about when the egg industry will have change to bigger chicken cages.

The issue has become public again after protesters blockaded the country's largest egg farm, Mainland Poultry near Dunedin, for 11 hours on Monday morning. 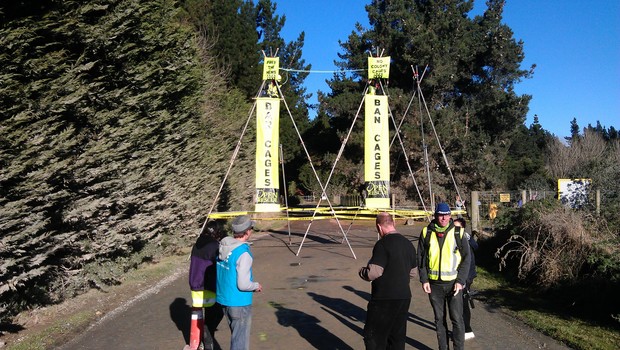 The scene at the farm gate on Monday morning. Photo: RNZ

The three activists were removed and charged with obstructing a public way, but they say the publicity was worth it.

The protesters say the publicity was needed to highlight a trial of colony cages, they want only free range eggs to be allowed.

The industry wants up to 18 years to make the change, which it says will cost egg producers $150 million.

A spokeswoman for the Minister for Primary Industries, David Carter, says the minister has not received the welfare committee's final report.

Early on Monday morning members of the Coalition To End Factory Farming group built 7m high tripods to block the main entrance to the Mainland Poultry farm in Waikouaiti. Two of the campaigners were suspended from tripods and another was bolted to a gate.

They say they wanted to highlight the trial of colony cages at the country's largest egg producer.

Police used a cherry picker and bolt cutters to remove the protesters and say they are likely to face charges.