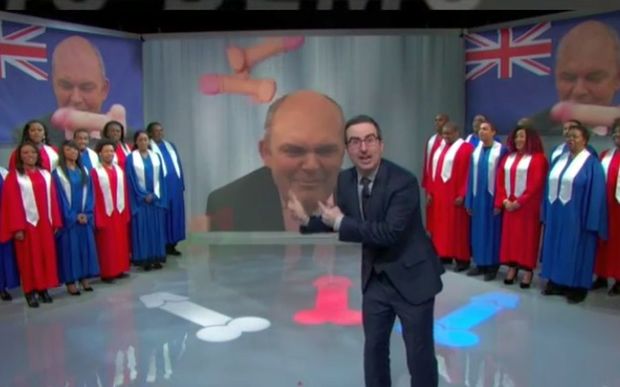 When Mr Joyce was hit in the face with a sex toy at Waitangi he seemed to be aware of what would happen next, and posted a tweet saying, "Someone send the gif over to John Oliver so we can get it over with".

Oliver duly complied, dedicating part of his Last Week Tonight show, which went to air on America's HBO channel yesterday, to the incident.

Oliver said his show was planning to take a break from covering New Zealand politics - after previously poking fun at Prime Minister John Key's pony-tail pulling and the process to pick a new flag - but he could not help himself on the first episode of the show's latest season.

After playing a clip of the moment Mr Joyce was hit in the face with the sex toy, Oliver said, "Step aside Citizen Kane, there is a new greatest film in town."

Mr Joyce, who has shrugged the Waitangi incident off and described it as amusing, was equally blasé about the Oliver show, posting, 'Well that was actually pretty funny' on his Twitter account last night.

Well that was actually pretty funny

Mr Key has not shared Mr Joyce's sense of humour over the incident, saying it was a bad look for New Zealand to have footage of it going around the world.