Economic Development Minister Steven Joyce: "You can't have a negotiation in the public domain without causing problems for the path of the negotiation." Photo: RNZ / Alexander Robertson

It was expected the number of protesters would be in the thousands, and Prime Minister John Key's non-appearance - and heavy rain - have been blamed for the lower turnout.

Mr Key decided yesterday not to attend, after the marae's trustees told him if he wanted to make a political speech he would have to give it in the political forum tent, away from the wharenui.

He will spend Waitangi Day in Auckland, with a spokesperson saying he would attend a couple of events including the NRL Auckland Nines.

More on Waitangi and the TPP

Mana Party leader Hone Harawira, who facilitated the political forum, said Ngāpuhi had sent the Prime Minister a clear message that he should not have insulted them by signing the TPP.

However, he said the Mr Key's decision not to attend was a disappointment, since he had given him an open invitation to debate the issue at the political forum.

"The real farce is that the Prime Minister expects to come and talk to Māori about the TPPA when he didn't have the courtesy to even let us see it, get a briefing on it, or be a party to the negotiations on it."

Mr Key did not give anyone the opportunity to debate the issues around the TPP with him, he said.

Mr Joyce, who was among the politicians that travelled to Waitangi, had a sex toy thrown at him by a protester as he spoke to reporters after leaving the Iwi Leaders Forum.

She was taken away by police, as was the item she threw.

Mr Joyce told Checkpoint with John Campbell that negotiations for the TPP took place in the same way that they would have for any other deal.

"When the Crown does [Treaty of Waitangi] negotiations with iwi, it doesn't sit there and tell all the other iwi what's going on, because it's a negotiation.

"You can't have a negotiation in the public domain without causing problems for the path of the negotiation." 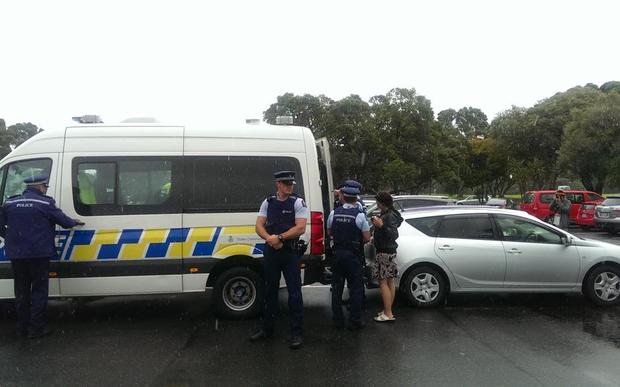 A protester is taken away by police after throwing a sex toy at Mr Joyce. Photo: RNZ / Shannon Haunui-Thompson

"I was amused. Genuinely. When somebody throws something like that at you, what else are you going to be? I was surprised and then amused.

"I don't think she got her point across... Throwing things at people is probably not the way to go about it, but each to their own I suppose."

Labour leader Andrew Little did give a political speech on the marae today - despite the Prime Minister being told he was not allowed to do so. 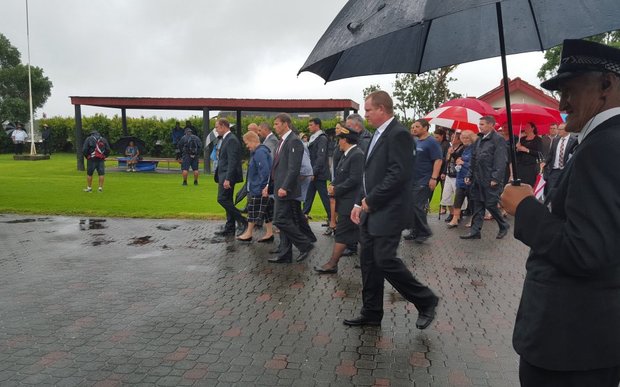 Mr Little, who spoke of the importance of sovereignty, said the marae trustees placed no restrictions on what he could talk about during the powhiri.

It was hard to avoid talking about political issues at Waitangi, he said.

"The Treaty of Waitangi is political. The process of national settlement is political. Everything that has happened since, in terms of redressing the grievances, is political - so pretty hard to avoid it.

"And, in the last two or three decades at least, the 5th of February has been a time to talk about topical political issues."

The Prime Minister should have turned up at the marae and made a speech regardless of what he had been told, he said. 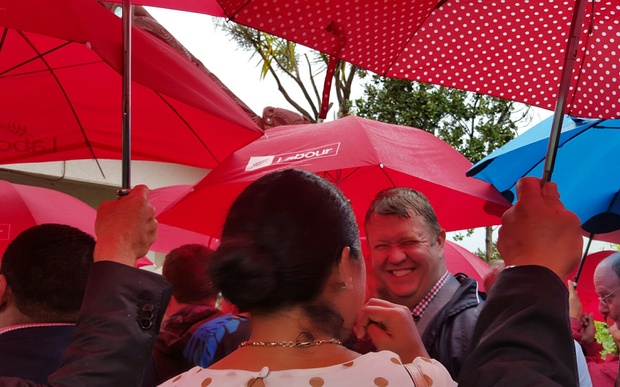 Labour MPs line up at the gate of the marae. Photo: RNZ / Lois Williams

'Nothing good can come when two sides stop talking'

Māori Council leader Maanu Paul said the breakdown in relations between the marae and the Prime Minister reflected poorly on both sides.

Mr Paul said Ngāpuhi elders had blown their annual opportunity to hold the government to account, and the Prime Minister had lost his chance to defend policies and plans.

"The marae trustees should have sent him a note and said 'come, but don't flaunt the TPPA at us, talk about all the other [Treaty of Waitangi] issues that affect us'.

"Like poverty, and how no Māori are on wages that will buy them a home in Auckland. And why Māori are in this position when they have the treaty, and paid the price of citizenship so dearly in both World Wars." 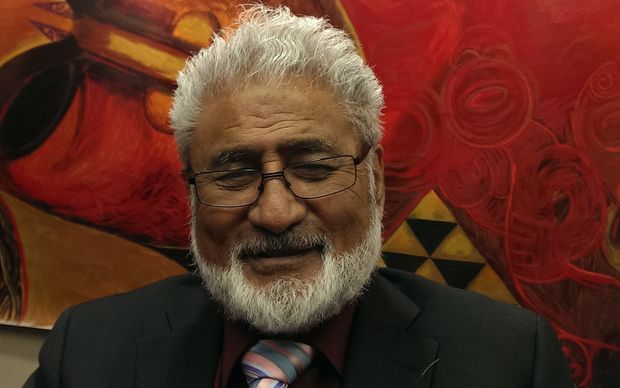 Māori Council leader Maanu Paul said a compromise between the two groups should have been possible. Photo: RNZ / Laura Bootham

Māori were still waiting for the government to explain how it acquired sovereignty after the Waitangi Tribunal found Ngāpuhi had not ceded it in 1840, Mr Paul said.

They were also still waiting for it to figure out what to do about water after conceding in the Supreme Court that Māori did have interests in it, he said.

"All these things could and should have been raised at Waitangi... nothing good can come when two sides stop talking."