Power Play - What will New Zealand First do to secure a place in the next government? 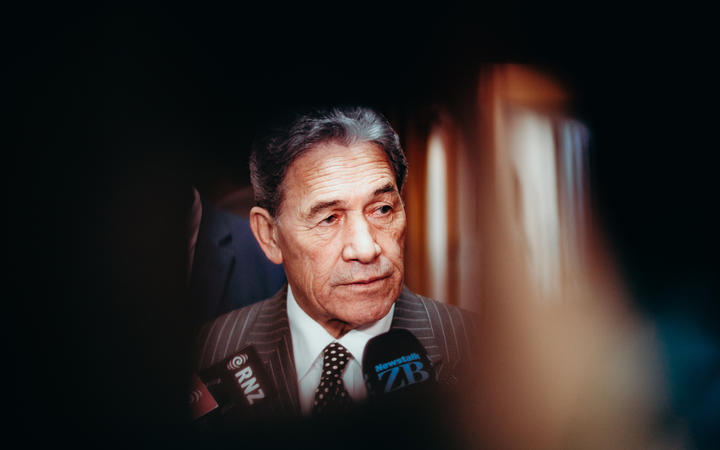 It's a familiar break up excuse that's used to get out of a relationship while causing yourself the least amount of grief possible.

In a coalition sense the me would be Winston Peters and the you, Jacinda Ardern.

Speculation has been brewing over what New Zealand First will do in the months between next year's Budget and the 2020 election, as it starts to think about how to carve out its own path, to avoid electoral defeat.

One option on the table is to negotiate an exit from the coalition and revert to a confidence and supply agreement to give it free rein in the election campaign.

New Zealand First is still routinely polling under the 5 percent threshold it needs to make it back into Parliament and while it notoriously polls higher on election day, the reality is this formula doesn't hold true when the party goes into an election having been in government.

That will of course not be lost on the canny political operator and party leader Winston Peters.

But there's an obvious risk - while not being so inextricably tied to the Labour Party will allow Mr Peters to be more vocal about his party's own policies and give room to criticise Labour - the flipside is the message it will send to the public is New Zealand First can't keep a coalition together.

Both Ms Ardern and Mr Peters have invested a lot of time reinforcing the message the coalition is strong and while they have different views on certain issues they ultimately find consensus when they need to.

Breaking up the coalition sends the message the unity is not what's being sold and undermines the messaging from both leaders.

It's understood there are people close to Mr Peters who will strongly push against this idea but the fact it's even been floated indicates the lengths the party could go to ensure its survival.

Also raising eyebrows was what's been described as a rather belligerent speech from Mr Peters to a business audience earlier this week that left even some of his own caucus worried he'd gone too far.

It's understood he used the speech to test out some of his stronger messaging ahead of the conference this weekend.

He spent much of his time at the mic railing against the Australian banks and the National Party.

New Zealand First's point of difference in past campaigns has been its ability to position itself as kingmaker - or of course queenmaker.

The worry from some in the caucus is that by going too hard against the Nats, he's aligning himself with Labour and compromising his party's ability to sell itself as truly able to go either way come election time.

But where he went further was to almost attack those in the audience for failing to reciprocate the love when New Zealand First applies its handbrake on typically-Labour policies.

Mr Peters cited the death of a capital gains tax, his party's push back on unions and applying a tough line on industrial relations reform as significant wins for the business sector.

But he went on to accuse the crowd of banking the wins and then simply returning to moaning about the state of the government.

The other area where New Zealand First has taken a stand is immigration.

In the last few weeks the coalition government has announced three significant changes to immigration policy.

The Recognised Seasonal Employer scheme will be boosted by just over 3000 in the next two years, the government has overturned the family link policy that stopped refugees from Africa and the Middle East resettling in New Zealand unless they had family here and it's reinstated the parent category visa - but with a cap on the number of parents who can come in and a high income test for the child sponsor.

Mr Peters told RNZ the tightening up on who can move to New Zealand is a direct response to his party's demands during coalition negotiations with Labour.

Heading into the party conference this weekend it's wins like those that will play right into the hands of its members - the same members who last year voted in favour of a New Zealand values bill - effectively a test for migrants and refugees moving to New Zealand.

Mr Peters will use his speech on Sunday to get the members excited about the election, his speech last year was very flat and used the same tired lines criticising the media and the National Party, and offered no new policy.

It's understood Mr Peters is still in the process of working out what policy to announce, but it's almost certainly not going to touch on Māori issues, such as the abolition of the electorate seats, or anything to do with the Treaty of Waitangi - as has been the case in the past.

That's because it's well understood senior MP and Cabinet minister Shane Jones is set to run in the Northland seat that Mr Peters lost in 2017 to National.

The seat is winnable for New Zealand First, as was proven when Mr Peters snatched it off National in the 2015 by-election with the help of Labour who had now-MP Willow-Jean Prime all but stop campaigning for herself to get Mr Peters across the line.

Another way to shore up more votes in the north in the meantime is the party not weighing into Māori issues unnecessarily.

The Māori vote is high in Northland and New Zealand First and Mr Jones are well supported by it.

They won't want to do anything to send them elsewhere.

A more pressing problem the party faces this weekend is the possibility the membership's disgruntled faction shows its face and causes a stir.

Mr Peters is well aware who the personalities are that have been leaking information to the media and accusing the leadership of treating candidates and party members poorly.

It's understood senior MP and Cabinet minister Tracey Martin, the most calming influence within the caucus, has been informally tasked with dealing to any riff-raff who might turn up.

But how she might stop anyone taking the floor to air the party's dirty laundry is not exactly clear.