An innocent driver has died and five others have been injured after another police pursuit ended in tragedy in Christchurch. 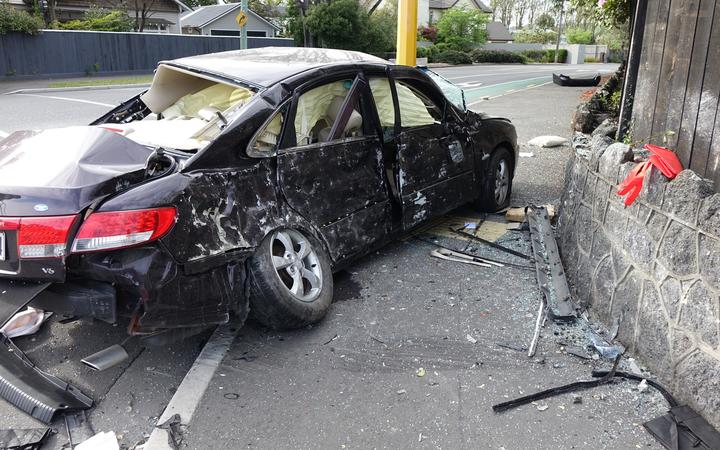 The motorist died after the car he was travelling in was hit by a fleeing vehicle this morning.

It brings the number of people who have died from police chases in the city to five this year alone.

Despite that, the police minister said there will be no review of pursuit policy.

The crash at the intersection of Idris and Glandovey Roads happened just after 4am. Police were chasing a car seen driving erratically -- and pursued it for four minutes -- before it ploughed into the innocent driver's vehicle.

The impact shunted the car into a stone wall -- critically injuring the driver -- who later died in hospital.

The collision happened in front of Nigel Watts' Fendalton home, who said the accident should never have happened.

He said he was "less then impressed" by the police's pursuit policy.

"[The] police don't seem to know, in my opinion, when to back off these guys. They just push them and this is what happens, they take someone else out on the way through.

"If they've chased that guy from Papanui Road, which is a fair way, stay up through this residential area [then] that's pretty ridiculous."

A sentiment echoed by his wife, Sandra Francis.

"I think they need to back of these young boys and slow down, and catch them further down the track. Not right here in the middle of the city in a residential area, look what's happened."

However their neighbour, Sarah Webster, said police have no choice but to give chase.

"Obviously [the driver of the fleeing car] is up to no good. So the police are only doing there job aren't they. It's just a shame that were some poor innocent people in the road."

Of the five in the car being chased, one is in a critical condition, with the other four having moderate or serious injuries.

The actions of the officers involved in this morning's chase are now being investigated by the Independent Police Conduct Authority. Their boss, Canterbury Metro Area Commander Lane Todd, said the chase was still underway when the crash happened.

He would not be drawn on whether the officers were ordered to abandon it. But he insisted the findings of a review into police chases in March were now being implemented by his officers.

"Additional training has been put in place but also there's higher reliance on what we call us the TENR risk assessment that the officers have to go through. So that's our threat, exposure and neccessity to respond and then the response itself.

"So there's a lot more training and oversight of that particular process."

Lane Todd said police had visited the family of the man of who died.

"This incident is an absolute tragedy and our thoughts are with the family of the man who has died and with those who are injured. Every day our staff come to work to protect the community and keep them safe."

Today's crash brings the number of people who have died from police chases in Christchurch to five this year alone.

In January, three teenage boys died on Blenheim Road when their car crashed and burned after hitting road spikes laid by the police.

In August, a pedestrian was hit and killed by a man in a stolen van fleeing the police.

Despite the rising body count, police minister, Stuart Nash, said there is no need for a review of police pursuit policies.

"We had a review that came out I think in about March 13th, 14th this year. But it was a comprehensive review with a number of recommendations and I think police agreed with with all the recommendations and we're in the process of implementing those."