The mother of two teenage boys killed in a Christchurch car crash after a police pursuit says she warned health workers and the police just a month earlier that they were at risk.

Thirteen-year-old Craig McCallister, his 16-year-old brother Glen and their friend Brooklyn Taylor died in January when their stolen car hit road spikes, then crashed into a tree and burst into flames.

Juanita Hickey says she begged district health board staff and the police to help Craig, who had mental health problems, but the DHB repeatedly discharged him.

She said she warned an occupational therapist in December what might happen, and that was passed on to the police.

"I said to her that I had extreme fears that Craig was going to die or maybe kill somebody else on the road due to his stealing of cars. I basically predicted his death."

The first inkling Ms Hickey had her sons were in trouble where when she saw a police Facebook post about a fatal car accident on Blenheim road.

"I was just thinking 'please, please, don't be my boys'. I had this horrible feeling it was."

All three boys died at the scene just minutes from home.

Ms Hickey said while Craig had ongoing mental health issues and had been in trouble with the police, Glen had a clean record until he stole his first car last year.

"It was only nine months to a year ago, Glen's career choice - he was going to be a policeman. So it was quite a shock when Glen started doing things, breaking the law." 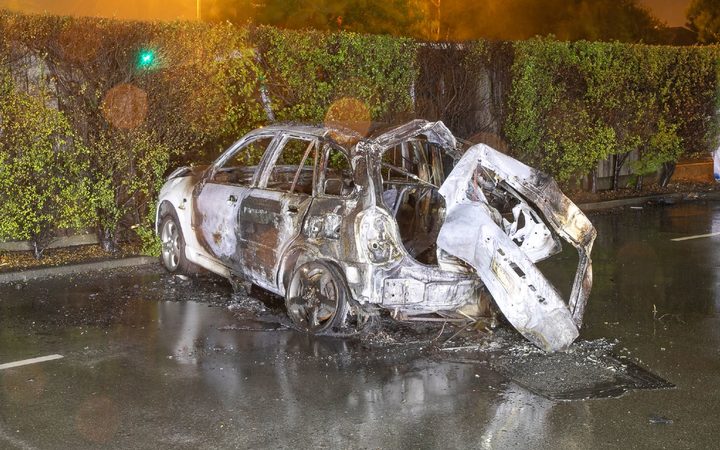 The remains of the car after the crash that claimed three lives. Photo: Supplied / NZ Police

Craig had been diagnosed with ADHD and conduct disorder but despite this had been repeatedly discharged from the DHB's Youth Mental Health services, CAFLink South.

With a family history on both sides of depression, anxiety disorder and schizophrenia, Ms Hickey had suspected Craig may have had other health issues too.

He had repeatedly confided in his mother that his current medication didn't make him feel good and described hearing a voice in his head often compelling him to do certain things.

After repeated appeals, an occupational therapist finally came to visit Craig at home in December last year, where Ms Hickey voiced her fears.

"I was at the end of my tether by that time."

The therapist documented what Ms Hickey had said in a letter sent to the police, but just four weeks later her prediction had became a reality. Not one son, but two were dead.

That family group conference was just one of dozens of meetings Ms Hickey had begged for in the three years leading up to Craig's death. She said she felt unsupported, even when she asked for a doctor's appointment.

"I was told there was no doctors available. There was only one doctor on that team and he was on holiday."

Christchurch DHB declined a request for interviews on this story due to privacy reasons, despite Ms Hickey giving permission to RNZ to discuss his case. The DHB also requested that any staff involved in Craig's case would not be named.