People in wheelchairs and on crutches are now among those sleeping rough in the Whangārei area. 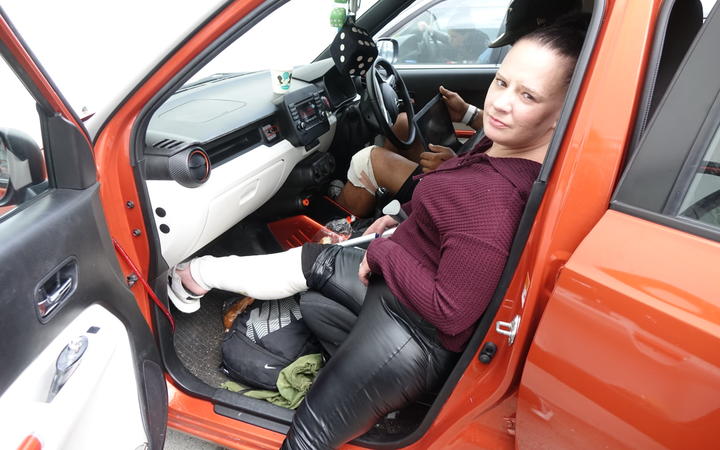 Kerry Inwood sleeps in the family car with her injured leg propped up on the dashboard. Photo: RNZ / Lois Williams

The town's Open Arms day centre for the homeless says high rents are forcing more people on to the streets as winter approaches - and a number of them have serious disabilities.

"Some are too immobile or in too much pain to get out of their cars to come in for lunch so we take the food out to them in the carpark," manager Sam Cassidy said.

When RNZ paid a visit on Thursday, several regulars were toughing it out in their vehicles, with bedding crammed into the back seats. 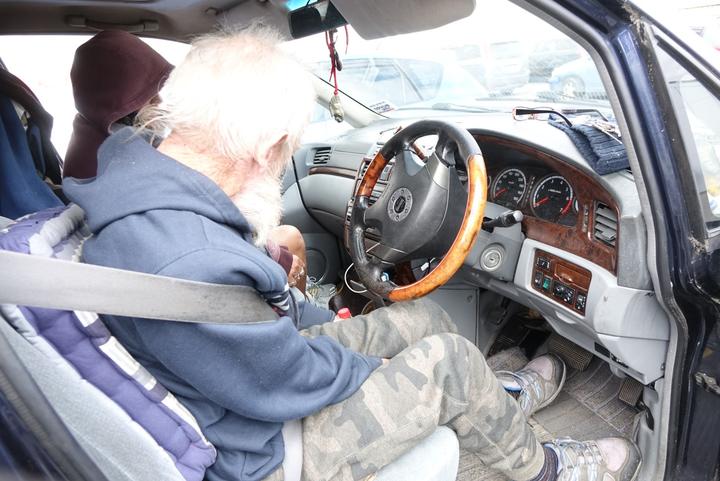 A 70-year-old man who has been living in his van is on morphine and cannot walk. Photo: RNZ / Lois Williams

One older man was hunched over the driving wheel of his van in obvious discomfort.

The 70-year-old former farm worker has been waiting years for a knee replacement, and he told RNZ he was on morphine for the pain.

Not that it helps much, he said.

"I can't bloody walk at the moment, eh. Might as well cut the leg off and be done with it."

The pensioner left his rental home near Kaikohe last winter when the landlord put the rent up.

He's been living in his van with his small dog, ever since.

Also in the Open Arms parking lot were Kerry Inwood, her husband and her 15-year-old son - crammed into a small Suzuki car.

Ms Inwood's leg was smashed when she was hit by a truck as she crossed the road in Whangārei in January.

The family's been living in their car for two months.

"I've had 21 operations since New Years; I spent three months in Middlemore and we're homeless ... we're waiting for WINZ to find an emergency house for us."

Sleeping in a tiny car with a leg in plaster was tricky but it could be done, Ms Inwood said.

"My son sleeps in the back seat; I push the seat back and I put my leg up on here," she said - indicating the dashboard.

To add to the family's troubles, her husband is nursing a fractured skull after a recent assault. 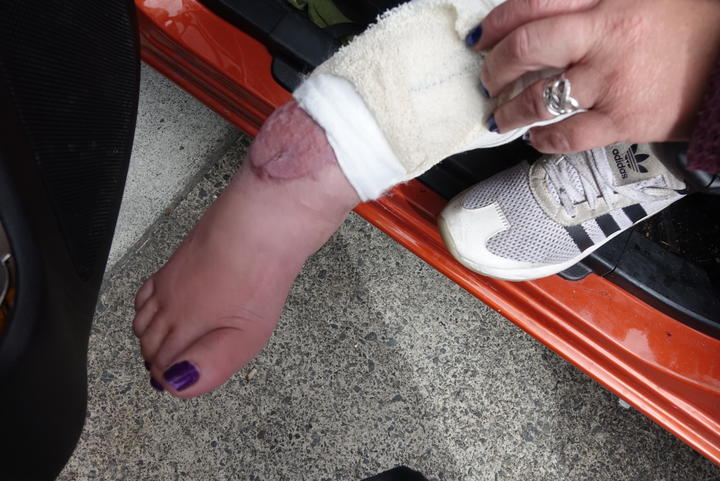 Kerry Inwood's leg was smashed when she was hit by a truck in Whangārei in January. Photo: RNZ / Lois Williams

"We need another safe place for them to go at night where they can just sleep and rest their heads and be safe. They're out there in the cold watching each others' backs to make sure their things don't get stolen or nothing happens to them," she said. 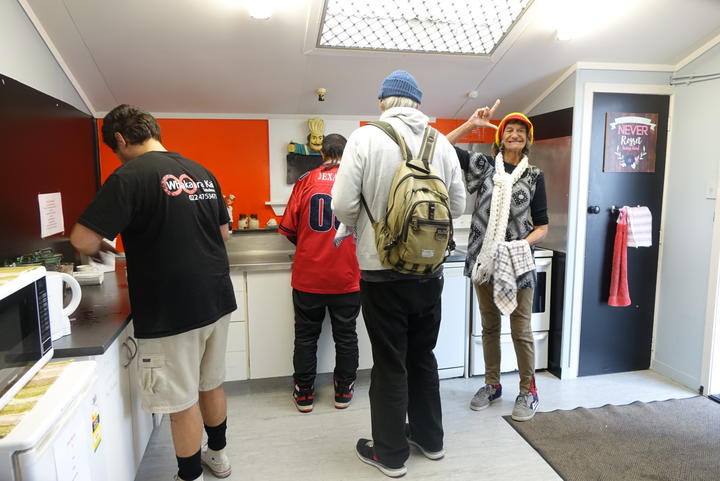 Another Open Arms regular, Daniel, used to work in the mines in Australia - but he's been unable to work since he suffered a brain bleed.

He was not so keen on the idea of a night shelter.

"I stayed in a shelter in Christchurch where there was a murder. One of the guys got a brick and killed another guy in the bed next to him, he had mental issues. So there are security risks.

"One of those pod hostels like they have overseas, that would be my ideal," he said.

But anywhere safe and warm indoors would be ideal, according to one woman at the day centre.

Being homeless was harder for women, especially those fighting addiction, she said.

The 60-year-old, who is a recovering meth addict and alcoholic, had been sleeping rough for years.

Open Arms had been a godsend, providing food, clothing and showers.

But she knew homeless women who have been raped, and at night she slept with one eye open, she said.

"It chips away at your mana and wairua ... as a woman around dusk time, I've gotta figure out where I'm gonna go. Because I worship at the Salvation Army, I'm allowed to go back there, but it's still on a park bench and I'm still out there."

The Whangārei woman said her dream would be a one-bedroom flat to call her own - but she's not holding her breath.