Up to 400,000 people living in Waikato can now speak to a family doctor online at night or over the weekend. 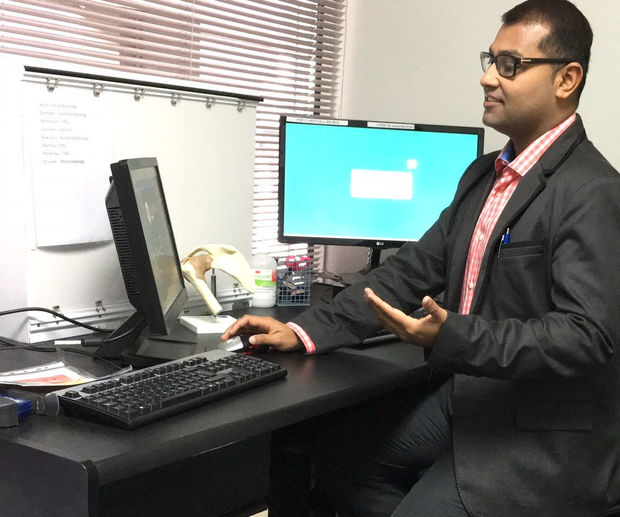 One of the doctors manning the online service is Dr Afraz Adam who is based in Auckland. Photo: Supplied

The free out-of-hours service is the latest step by the local district health board in its Virtual DHB plan to put healthcare into homes.

Raglan, 48km west of Hamilton, is one area that's expected to find the new service useful.

It's a picturesque town with a population of about 4000. Come summer, though, that explodes to more than 20,000 people, and that brings pressures.

No more so than in health, for a town with between two and four GPs, plus an emergency service, known as Prime, that isn't currently operating.

A Raglan resident and trustee of the West Coast Health Charitable Trust, Fiona Edwards, said it was an issue.

"I think at the moment it's pretty tough in Raglan after hours.

"We're looking ahead to the summer and saying we desperately need to get some of our doctors and nurses on this Prime [emergency service], there's a training programme happening in November that we want to get a bunch on, and we may or may not still have enough people to actually run the after hours Prime service."

She said there was always a St John ambulance to fall back on. It has a full-time driver from 8am to 5pm daily, with volunteer back-up after hours, but there's always the chance it may be tied up elsewhere in the district.

Fiona Edwards is a strong advocate of the new out-of-hours online GP service that began in Waikato last Monday.

"It gives people the option of having something on their phone that they just press that button and they can talk to a doctor and the doctor will say, actually hang up and dial 111 or actually that's not an emergency and I can send you a script for that which you can get filled in the morning, or actually you might need to just administer some panadol to your child."

The new service is available from 6am to 11pm Monday to Friday and from 8am to 8pm on weekends to Waikato residents who have been in to a local hospital and signed up.

The DHB's clinical director for primary and integrated care, Damian Tomic, said that was needed so the doctors knew who they were talking to by video and had the right medical records in front of them.

He said it would fill a gap patients complain about - how to get care after hours without driving to a hospital emergency department.

It will also cut out another bugbear for many - the cost of after-hours care.

Dr Tomic said the online service should address some of the barriers to accessing care.

"I would say the main barriers to accessing care are difficulties with travel and difficulties around paying for the service and we want to make sure that we address these barriers using this free online platform, and for that reason I don't think those two main barriers are specific to people living in rural areas. I am sure that those issues arise for people living in Hamilton City for example also."

Between 10 and 15 doctors experienced in primary, urgent and emergency care man the service. They work on contract to the DHB from as far afield as Wellington and Auckland.

One of them, Auckland-based Dr Afraz Adam, said it was a 21st century service whose time had well and truly come, and the risk of missing anything was extremely low.

"All doctors that will be providing the service have to be very well versed with their limitations as to what they can provide and what they need to say, OK at this point you need a physical examination, you will either go to your nearest accident and medical centre or you will present at the [hospital] emergency department now."

The DHB is investing about $400,000 to pilot the scheme over the next six months in what is thought to be another New Zealand first for the DHB in the technology arena.