Morning Report has aired previously unheard parts of an interview with the woman who said she was abused at the Chiefs' rugby team end-of-season function, including allegations that players tried to pull their penises out. 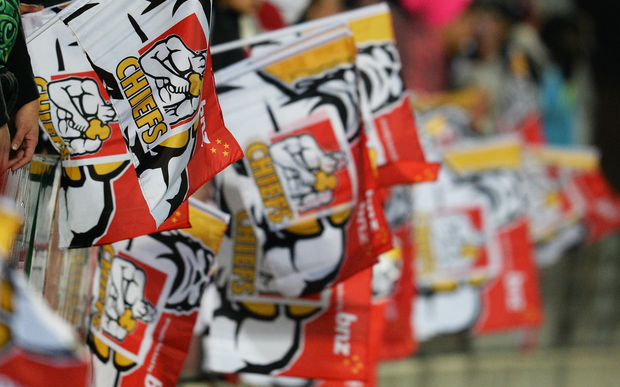 The stripper, known as Scarlette, had earlier said some players groped her, threw gravel and swore at her at her while she performed at the rugby team function on 1 August at the Ōkoroire Hot Pools, near Matamata.

New Zealand Rugby said those claims were contradicted by independent witnesses not connected to the team, and it decided not to take further action, other than giving the team a collective warning.

Scarlette's interview with RNZ last month was not aired in full at the time, because there had not been time to bleep out some words to make it suitable for broadcasting. Some of the interview is likely to never be broadcast because of the content, but much of it was played on Morning Report this morning.

Scarlette said team members were "beyond drunk" when she arrived so were not allowed in the main building and had to go to the garden bar.

She said some players groped her, threw gravel and swore at her.

"[One] proceeded to touch my vagina multiple times with me telling him not to and eventually having to fight him off.

"That didn't deter him though - he kept going.

"Then during all of that they just crowded in on me, real pack mentality kind of a thing.

"They tried to get their penises out, which I don't do.

"They were throwing gravel at me during the time as well. I'd normally stop just from that but I felt that I couldn't stop because I've been in situations before where I've been held in rooms I've had knives held to me and I just didn't want this one to go that way.

"If you show your vulnerability they do attack it."

New Zealand Rugby Union chief executive Steve Tew has defended the way the investigation has been handled including questioning players before speaking to Scarlette.

"Her version of the story was broadcast live on television some time ago," he said yesterday.

"It's not fair to use that as a criticism - we knew exactly what she had alleged live on television."

Mr Tew told Morning Report yesterday Scarlette was interviewed last because she was not available and they could not get a response to messages.

Race Relations Commissioner Dame Susan Devoy said this morning that regardless of the situation "people do deserve to be treated with respect and dignity. There's been none of this shown in this inquiry."

The investigation by the Chiefs was a "complete and utter disaster" for New Zealand Rugby and the handling of the issue had been a "shambles", she said. The Rugby Union should "do the right thing and sort it out" and conducting another investigation, that was independent, would be a good start.

Dame Susan is one of a group of influential women who have signed an open letter to the rugby union criticising the way it dealt with the performer.

offered support to the Chiefs directly and urged them to do an independent inquiry after news of the incident broke a month ago.

Read the letter on the website 'Love Rugby. Respect Women.

Dr Blue told RNZ's Checkpoint yesterday it had been a mistake not to make the inquiry independent.

"There should have been some strong recommendations about the process, about the management, about the fact there's a woman who felt so unsafe that she went public.

"It went off the rails completely. The first error was obviously not having independence and doing their own internal inquiry conducted by a paid employee."

As a lawyer, he said, he found the investigation process "rubbish" and sexist on many levels.

He supported the call to have rugby clean up its act, but said the players' behaviour was part of a bigger issue.

"These are grown men," he said.

"How do you go 30 years and not learn that touching a woman without her consent is not right?

"This is a whole education system that needs to be addressed

"The rugby system in high schools need to be addressed."

Mr Fuimaono-Sapolu said he would expect chauvanistic behaviour from older people involved in the game but not from the younger men.

Former Waikato rugby captain Paul Anderson said an independent panel, representative of both men and women, should investigate and Scarlette should be provided with representatives.