Sitting in a small room filled with musical instruments, Wellington shop worker Peter Jamieson told of his adoption as a baby.

"My parents, they chose me and I was brought up in a very nice, normal family... all through that I was told I was adopted." 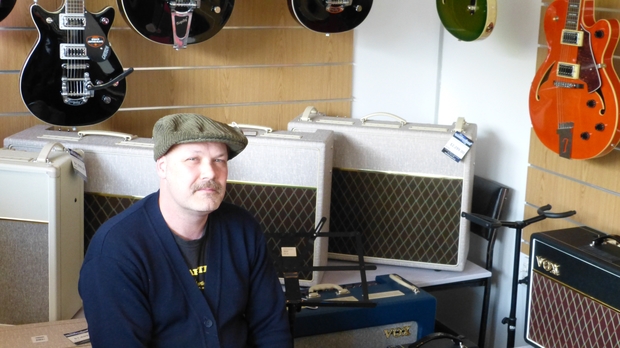 Peter Jamieson, who was adopted as a baby, said knowing about his history meant a lot to him. Photo: RNZ / Max Towle

He's since reconnected with his biological mother and father, and said he was incredibly glad he did.

"The time when I found my biological family, I was at a maturity level where it wasn't going to faze me," he said.

"My whakapapa was really important to me - just knowing about my history meant a lot to me - I had felt detached and didn't know anything about where I came from."

Parents who've adopted 'must be open with children'

But Unicef advocacy manager Deborah Morris-Travers said many were not as lucky.

Under the current law, when a child is adopted, a new birth certificate is drafted without any mention of the biological parents.

"It's important for them to maintain contact with their birth family, but also, as they get older, to have more information about their cultural identity," Ms Morris-Travers said.

"It's about the child's right to know who they are - New Zealand continues to have adoption law which breaches human rights."

Ms Morris-Travers said Child, Youth and Family was generally good at telling parents that adopt to be open with children, but said there still needed to be a law change to enforce that.

Dr Anne Else of the group Adoption Action, who has written about the history of adoption, said the law breached the Human Rights Act and the Bill of Rights Act.

"The act is based on the premise that neither the adopted person, nor the birth family, would ever see each other again," Dr Else said.

"It is entirely orientated around adult interests. The birth mother can sign a consent when the child is 10 days old, which is one of the shortest periods in the world."

She said another problem was there was no requirement for a child to give consent to be adopted, even at the age of 17.

Adoption laws criticised but no change yet

There were 152 domestic adoptions last year, down 25 percent from five years ago, and many of those were people adopting family members.

The number of applications for adoption also fell from 253 to 207 in that period.

In 2000, the Law Commission published a report suggesting about 100 changes to the law, but to date, none have been imposed.

Law Society family law chair Allan Cooke said the law lacked regard for children's cultural background and their heritage, which he said was important for Maori and Pasifika groups.

"The other issue for us is there's no way for the voice of the children to be heard in the adoption when it goes through the Family Court," he said.

"This is a law that dates from 1955 and effectively fossilises the attitudes and values of that time. It's legislation that desperately needs overhaul."

Mr Hague has tried to push a bill updating the law for seven years, and had met with Justice Minister Amy Adams who he said was responsive to change.

But the minister's office provided a statement which said "adoption law reform isn't currently on the Minister's work programme due to competing priorities for law reform in the justice sector".

When asked to explain, a spokesperson said "there are other things on the minister's agenda that are more important right now".