Labour is standing by its fiscal plan, saying the numbers are robust and an attack from the National Party is a cynical attempt to distract voters. 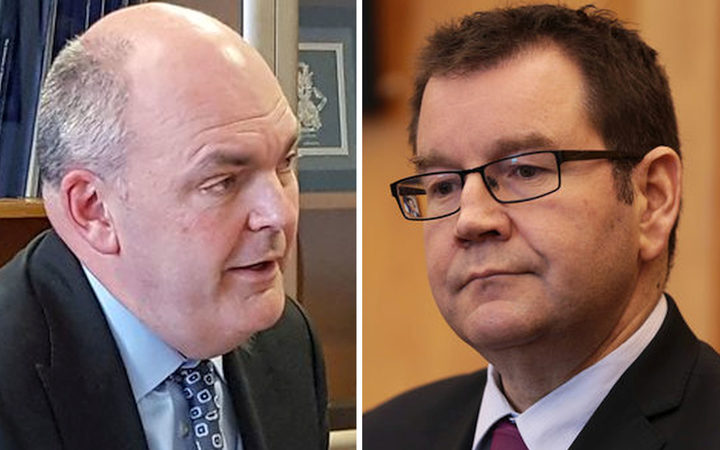 He said most of the shortfall was because Labour had failed to roll out each year's operating allowances into subsequent years, and he was certain Labour had not included the right figures.

"There's only two explanations, either they've decided they don't need any expenditure outside... for the next two budgets beyond what they've already allowed for in the current year... which is just literally untenable, or they have made this mistake."

There were are a number of items that needed to be addressed, Mr Joyce said.

"Firstly a failure to roll out the operating allowances which they've nominated for each year and subsequent years.

"Secondly a failure to allow for any increase to paid parental leave in their families package, despite saying it is included.

"Thirdly counting multinational tax revenue when Treasury has already it in the pre-election fiscal update."

He said, as a result, Labour's plans would increase debt by $20bn over the next four years, not by the $7bn the party had already outlined.

But Labour's Grant Robertson strongly rejected the accusations, and had just put the extra spending figures "above the line".

"So within the health and education that are in the fiscal plan, they represent the lion's share of money that needs to be rolled over, we have done that - there is around $6.7bn dollars worth of money for health for that and about $1.8bn for that in the education line.

"What's left over at the end is spare cash and I have never stated that that would have been accumulated funds."

If there was confusion, said Mr Robertson, it could be around the use of the term 'operating allowance'.

Labour has also allowed for an expanded paid parental leave scheme within its Families Package, but was not specified, he said.

"But quite clearly for us, we have have put in the spending that is required to meet the commitments that we have made."

He also said the extra tax revenue Labour government would leverage out of multi-nationals was based on advice from the Inland Revenue Department.

"Which is that for every additional $1 that they are given to do work investigating tax avoidance, they will get $7 back, we're backing them to do that... we're putting extra money in for tax investigators - so he [Joyce] is just completely wrong about that."

The group of economists that examined Labour's fiscal plan are standing by their assessment saying that it is sound.

The economic consultancy, BERL, said the hole National is talking about was fictional and amounted to a disagreement over how 'operating allowance' was defined.

The organisation said Labour had allocated the operating allowance into relevant spending lines, such as in education or health.

It also said Labour had costed an extension to paid parental leave in its plan.

BERL stressed it was not party political and made no judgement over policy but that Labour's numbers did add up.

Labour leader Jacinda Ardern said they always expected National to robustly challenge their fiscal plan, which was why Labour had it assessed by independent economists BERL.

"We did that because we knew of course that we would have this scrutiny. It's election time and it would come from our opponents, that's why we brought in that independent view before we released it."

National leader Bill English said it was not a matter of 'he said, she said'.

"We've had a look at the numbers, made clear there's an $11bn hole there, Labour now have an obligation to explain to the public.

"If it was a few $100 million over three years maybe you could say it doesn't matter too much but if it's $11bn and it's about increasing debt when we're meant to be paying it off."