American mining giant Newmont is quitting this country after a quarter of a century, after selling its Waihi mine to Oceana Gold.

It will use the money for investment in Australia after reorganising its business following a loss two years ago. 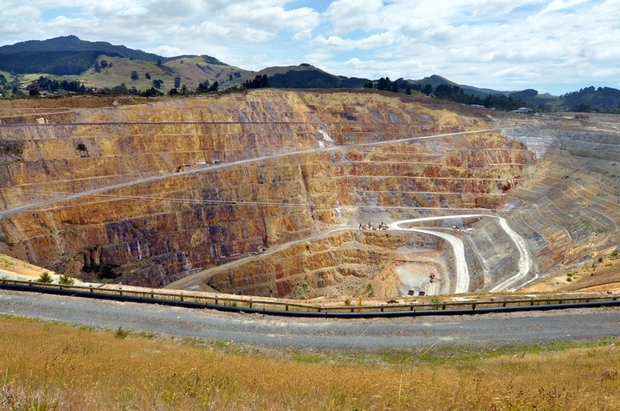 The goldmine in Waihi is changing hands from Newmont to NZ company Oceanagold. Photo: 123RF

The deal will give Oceana control of two huge open cast mines, Waihi in the western Bay of Plenty, and Macraes in North Otago.

Waihi is famous for its dramatic hole in the grounds. Under the deal, it will become the property of the company that owns the other "big hole" at Macraes Flat in North Otago.

Colorado-based Newmont has owned Waihi for decades but is selling it to Melbourne-based Oceana Gold. Also selling is an adjacent tunnel-based mine.

Newmont is getting US$101 million for the deal. Senior executive Ken Ramsey suggested the deal was purely a commercial one for both his company and for Oceana.

"They would see that as being a good fit for them," he said. "Newmont would look at those options, particularly around being able to optimise our portfolio and further strengthen our balance sheet."

Newmont, which mines gold in several countries, made a huge loss in 2013, and has been rebuilding its business since.

Mr Ramsay made it clear that the money from selling Waihi will be used for other investments.

"As for the proceeds of the sale, we would certainly be using that potentially for areas like our Tanami expansion project in the Northern Territories of Australia."

In its last annual report, Newmont says it recovered 132 thousand ounces of gold from Waihi last year and has 0.4 million ounces in reserve there.

That figure for reserves equates to 11 tonnes of gold still in the ground, which, if aggregated, would be a lump of gold the size of a large armchair.

In a statement to the stock exchanges in Australia, New Zealand and Toronto, Oceana Gold insisted the deal was a good one.

A landslide just before Easter stopped work at Waihi's open cast mine, leaving the underground Correnso mine to pick up the burden.

"The mine life based on current reserves is three and a half to four years," he said. "However it is a very prospective, high quality gold field, so the potential for future mine-life extensions is more than two decades."

The mayor of Hauraki also welcomed the deal. Waihi mine employs 340 people, many of them highly skilled.

John Tregidga said the sale covered the entire mine including its plans and consents, and he thought that was a good sign.

"There are still significant mineral reserves both in the existing licences and in the amount of prospecting that is still going on.' he said.

"I think it is a good sign for the future for ongoing mining and I am sure Oceana have not purchased it just for the existing licences, they would see reserves that have still to be tapped or found."

Meanwhile, good news in the North Island was tempered by less good news for Oceana's Macraes open cast mine in North Otago.

Oceana earlier announced it would stop production at the end of 2017.

It recently expressed hopes that this could be extended by gold prospecting that is underway, but this has not yet become definite.