Yours, Dreamily by The Arcs 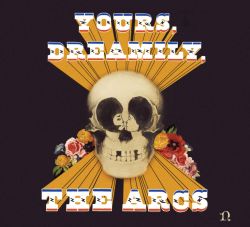 f I had to sum up in one sentence the secret of Dan Auerbach’s success, it might be a gift for taking things that don’t sound like much and turning them into things that sound pretty great. That was the story of his band The Black Keys, who made a virtue of their limitations all the way from their two-piece lo-fi roots to the arena rock of El Camino. And in a way that’s the story of his latest project. The Arcs is a new band put together by Auerbach to kill some unexpected downtime after The Black Keys touring plans were put on hold due to drummer Patrick Carney’s bodysurfing accident.

I don’t know whether Auerbach already had a bunch of songs stored up for some future Black Keys project or whether these were purpose written, but the Arcs seem to have effortlessly come up with a full album of material. And there are places where it could pretty much pass for The Black Keys. But in many ways The Arcs have more in common with some of the other projects Auerbach has been busying himself with since The Black Keys’ success turned into a go-to guy for artists as diverse as Dr John and Lana Del Rey. In particular, this album revisits the swoony, faintly narcotised sound of Del Rey’s Ultraviolence. There’s a weirdly distressed quality, like an old 45 with its grooves worn out, that was a feature of the records The Black Keys made with the producer known as Danger Mouse, and Auerbach has gone on to apply it in some of his own productions.

But if the lessons of Danger Mouse and Auerbach’s bluesy sensibilities inevitably make whatever he does sound a bit like The Black Keys, the other members of this new combo bring some special skills of their own. In particular there’s Homer Steinweiss, house drummer for the Daptone label and Sharon Jones and the Dap Kings. A loving encyclopaedia of soul and funk, he matches grooves so good they might be sampled off a Stylistics record, to Auerbach Philly-soul soundalikes that sound like they might have been old Intruders’ singles. If the lyrics – which vary between well-crafted and a bit cringey - read like the correspondence between a parting couple, the music delivers that correspondence on a dreamy bed of bluesy psychedelic soul. It mightn’t seem like much, but I do like the way it sounds.

Songs played: Outta My Mind, The Arc, Put A Flower In Your Pocket, Stay In My Corner, Pistol Made Of Bones