The Song Crush team listen to the feminine flecked new songs from indie-rock veterans The National, and a minimalist cover of Cher’s 1998 hit ‘Believe’ amongst other great new releases. 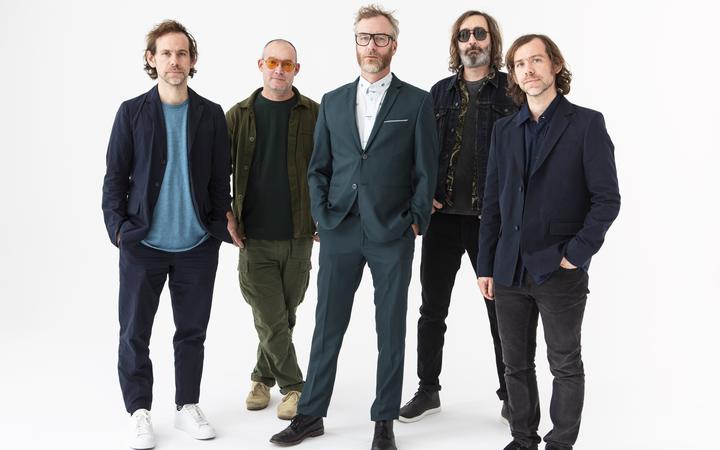 The National - I Am Easy To Find

While all the hallmarks of The National’s sound can be heard on their 8th album - Matt Berninger’s low rumble of a voice, stuttering drum beats, the wild electronics of their 2017 album Sleep Well Beast, and Bryce Dessner’s lush orchestration, there’s also a new texture in there: Women’s voices.

It’s about time. Berninger’s wife Carin Besser has played a big role in The National over the last 5 albums, both co-writing lyrics and inspiring them. At time’s it’s felt like marriage counselling -  Berninger trying to work out all of the little issues of long-term relationships, but for the first time I feel like I’m hearing Besser’s side of the conversation.

And these voices are special -  Bowie side-woman Gail Ann Dorsey, Irish songwriter Lisa Hannigan, folk singer Kate Stables and Sharon Van Etten amongst them. At times the songs completely surrender to them, and to be honest it’s a relief from Berninger’s growl.

The Lyrics and melodies are credited to Matt, Carin and also the film-maker Mike Mills, who has made a short film of the same name, starring Tomb Raider star Alicia Vikander, to sit alongside the album. It is not the music video for the album, nor is the album it’s soundtrack - but there’s a synchronicity to them - each takes inspiration from the other, and both thematically seem to deal with the totality of life, and the roundabout nature of it.

The National - and Matt Berninger in particular, has always had a talent for capturing tiny little poignant moments of life and making them seem momentous - this album is so full of these it’s bursting with the weight of an entire life full of them.

The title track features Kate Stables, one of my favourite British singers, she makes music as This Is The Kit.  It’s a rocking horse tempo folkie song which just gently simmers away, ruminating on missing someone. KJ

Norwegian singer-songwriter Okay Kaya is best known as the hypnotic, low-pitched vocal collaborator behind King Krule’s ‘Slush Puppy’ off The Ooz. She released her first full-length album Both last year, a polished bedroom pop effort that interrogates identity, mental health, sexuality and the indignities experienced by women in the music industry.

Her cover of 1998 anthem ‘Believe’ by Cher is a minimalist riff of the original, with super airy synths and raw vocals that offer a more melancholic take on the universal conflict of moving on from heartbreak. It’s always a risk to take such an iconic song and attempt to turn it into something unique, but I reckon Okay Kaya has nailed it. WR

When New York-based vocalist and musician Madison McFerrin released her soul-drenched Finding Foundation EP in 2016 her unique looping and layered approach to a capella was warmly received by the wider soul and hip hop communities, with The Root’s Questlove  dubbing it “soul-appella.”

McFerrin’s music prowess should come as no surprise when we check her musical DNA. Her father Bobby McFerrin popularised the idea of the human instrument with his worldwide hit Don’t Worry be Happy, while grandfather Robert McFerrin was the first African-American man to sing at the Metropolitan Opera.

McFerrin has teamed up with a few of her favourite collaborators to re-imagine those earlier releases. For 'Learn Your Lesson' she pairs with New York electronic musician Photay who layers her shimmering harmonies and vocal hooks over infectious Afro-Latin rhythms and a low-slung bassline, forming a leisurely hypnotic shuffle that weaves its way onto both the dancefloor and into the kitchen.

Dance or Cook – it’s your choice…

The lead track from Craig Finn's I Need A New War, finds the Hold Steady front man in fine form. Finn's narrative style lyrics have always been a draw card for his work and 'Blankets' is a great example of why.

Finn often refers back to touchstone characters and places in his songs and here he pays a visit to Minneapolis/St Paul, Minnesota as he has many times before. The protagonists are Bukowski-esque figures with their own sets of issues and their as well crafted as in any if Finn's previous work. Musically, there is a bit more of a soul influence than the Hold Steady usually shows which works well to distinguish this as a Craig Finn solo track.

We’ve been waiting for Wellington-formed (but now world-scattered) Beatcomber to reemerge with new music since 2016, and the delivery of debut EP Creature Comforts this month was a welcomed gift to many.

The track ‘Noise Controlled’ is a guitar-driven party banger that pays a subtle, poignant homage to the music of Jay Reatard (The Reatards, Lost Sounds), who passed away nearly ten years ago after a drug overdose. It’s also a tribute to the noise control officer that was called out to band practice in Hataitai, later turning up to a gig after a quick Facebook search of the band off the clock. If that’s not symbolic of the all-embracing inclusivity our live music scene strives for, I’m not sure what is. WR

Melbourne musician Angie McMahon captures feelings of ennui, loneliness, lack of motivation and writers block in this song, with brilliant rhyming of ‘Pasta’ with disaster and faster. And like a montage in an indie coming-of-age film, by the end of the song she’s about to have an epiphany and get her act together.

Big bold rock chords come together with slacker rock attitude, reminding me of Lou Reed’s ‘Walk On The Wild Side.’ McMahon’s deep and mature voice and songwriting make her one to watch out for, her debut is due later this year. KJ

Listen to all our Autumn Song Crush picks here