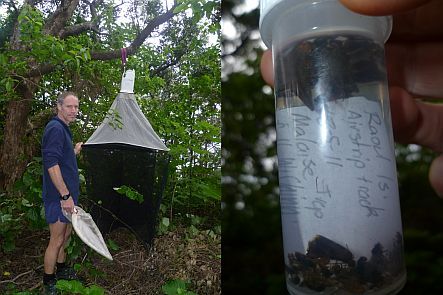 Warren Chinn standing next to his portable malaise trap (above left), the insects collected in the trap (above right), and various Kermadec Islands moth specimens (below left) (images: A. Ballance) 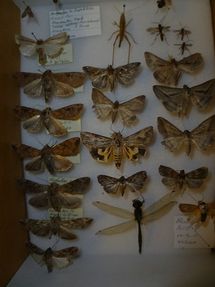 In another story from the Kermadecs Biodiscovery expedition, Alison Ballance joins Department of Conservation entomologist Warren Chinn as he collects terrestrial invertebrates on Raoul Island. The invertebrates of the island group are poorly studied, and although he could make only brief visits ashore on most islands, Warren used as many methods as he could to collect the widest possible range of species. Back on the boat Braveheart, Warren sorted specimens into RTUs (Recognisable Taxonomic Units) which would later be sent to the relevant experts to describe. Ants, jumping spiders and geometrid moths were among the more common creatures collected. You can read Warren’s impression of the expedition here.