Touted as the world's first practical jetpack, the Martin Jetpack is being developed in Christchurch. Constructed from carbon fibre composites, it runs on petrol with two downward pointing fans to provide lift. Weighing in at about 115 kilograms and standing at a height of 1.5 metres, it's much larger than the Bell Rocket Belt (the jetpack used in the James Bond movie Thunderball) which could only maintain flight for 26 seconds on a full tank of fuel. The Martin Jetpack has been designed to fly for at least 30 minutes. 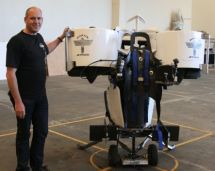 Named after its inventor Glenn Martin, the Martin Jetpack was listed last year in Time Magazine's best 50 inventions. A recreation and military version is being developed, with the recreation version expected to reach speeds of about 70 km/hour, and the military version about 130 km/hour. Chief Executive Richard Lauder(pictured left with the Martin Jetpack. Image: Martin Aircraft Company) explains to Ruth Beran how the jet pack works. To see the jetpack in flight, click here.