Antarctic ice and science feature significantly in a recent issue of the prestigious science journal Nature. New Zealand researchers were among the many international authors, writing about the state of the frozen continent in the past and present, as well as forecasting possible futures under different climate change predictions. 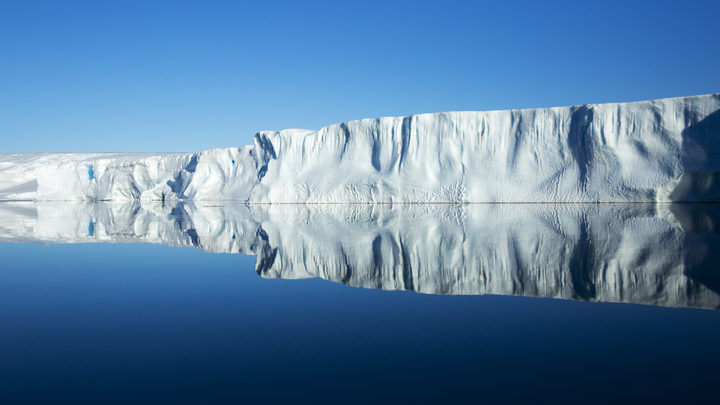 Antarctica is the driest continent on earth, yet it holds 70 percent of the world’s freshwater. That water falls as snow, and over millennia it has compressed and created a sheet of ice that almost completely covers the rocky continent of Antarctica.

The Antarctic ice sheet is nearly twice the size of Australia and in places it is up to 5 kilometres thick. If it all melted it would raise mean global sea level by about 58 metres.

Crucially, the Antarctic ice sheet is actually made of two ice sheets, which are quite different from each other – and this has important consequences for how they react to a warming climate.

The larger East Antarctic ice sheet is the big bulge lying to the east of the transantarctic Mountains and it includes the South Pole. Here, the ice sheet is sitting on land and is thought to be relatively stable.

The smaller West Antarctic ice sheet includes Marie Byrd Land and the Antarctic Peninsula, and is a marine-based ice sheet. It is up to two and half kilometres thick and much of lies below sea level, but it still sits on bedrock. When it is sitting on bedrock it is what scientists call ‘grounded.’

Ice expert Nick Golledge, from the Antarctic Research Centre at Victoria University of Wellington, describes the West Antarctic ice sheet as the “little brother” of the two ice sheets. He says it is “dynamic, a little bit unruly. It has about five metres of sea level equivalent locked up in it and it tends to be behave a bit more erratically [than the East Antarctic ice sheet].”

In terms of ice melt and rising sea levels due to a warming climate, Nick says “this is the one we are all worried about … it’s the one that is most vulnerable to warming ocean.” 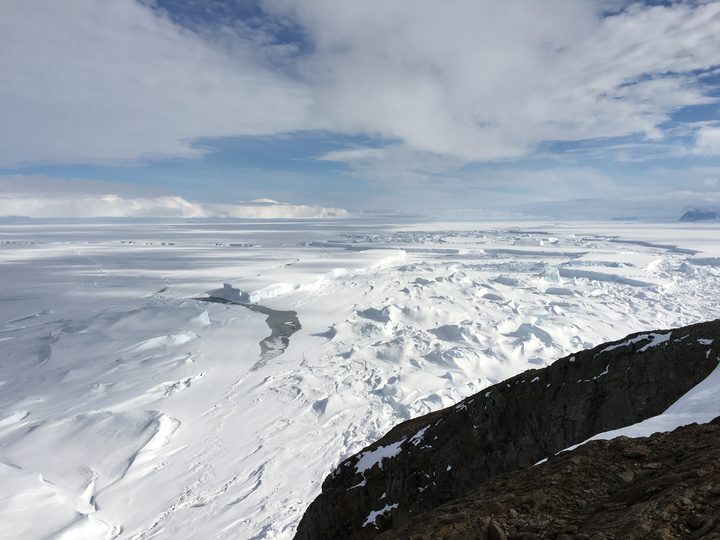 Scar Inlet: The sheared area of the northeast side of Scar Inlet Ice Shelf - the largest remnant of the Larsen B Ice Shelf which disintegrated in 2002. Looking south from Cape Disappointment. Photo: Ted Scambos/ NSIDC/AAD

Rising ocean temperatures have their most direct effect on Antarctic ice where it meets the sea. The ice sheets are not static; they flow towards the coast where they form a floating apron known as an ice shelf. The ice shelves act like a plug to hold back the ice sheets.

“Ice shelves fringe about three quarters of the Antarctic coast and they play a crucially important role in moderating sea level rise by buttressing and slowing the movement of glacial ice from the interior of the continent to the ocean,” says Luke Bennetts, from the University of Adelaide.

Sea ice is another important feature of Antarctica. It is a few metres thick and forms from the freezing of seawater. Each winter a vast expanse of sea ice forms, effectively doubling the size of the continent.

Victoria University of Wellington geologist Rob McKay says that “sea ice is also connected to the ice shelves. The water that circulates under an ice shelf becomes super cold, and as that super cold water moves out it creates more sea ice.” 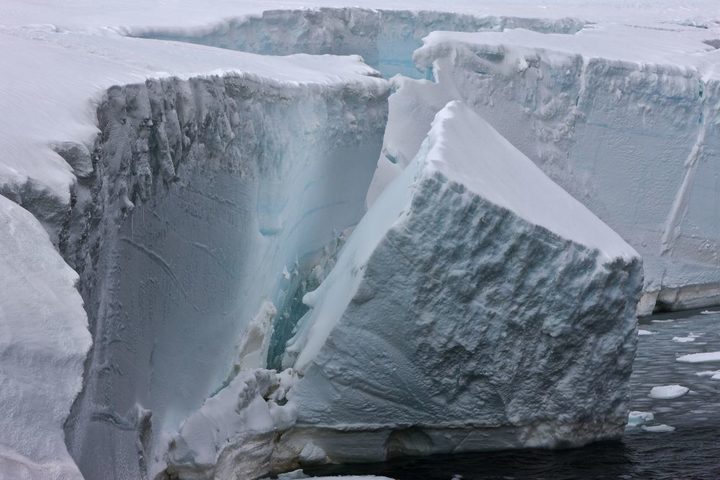 The Antarctic climate system is complex and inter-connected. It is also an integral part of global ocean circulation. 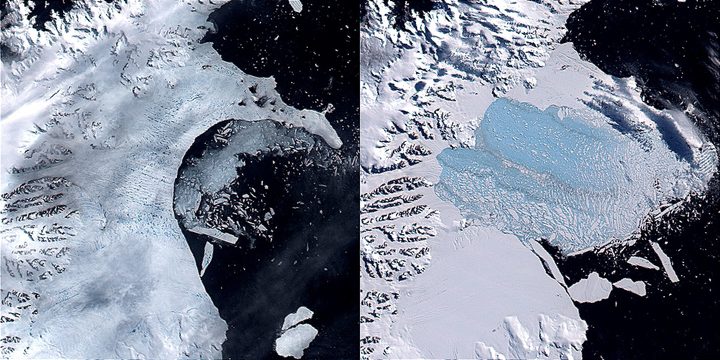 Antarctica is losing a lot of ice

In a paper called ‘Mass balance of the Antarctic ice Sheet from 1972 to 2017’, a team of researchers updated estimates of how much ice is being lost or gained in Antarctica.

Their key finding was that the ice sheet has lost three billion tonnes of ice in 25 years, which is equivalent to 8 mm of global sea rise. The rate of loss has increased sharply in the past five years.

An important finding was how various parts of Antarctica are responding at different rates. The West Antarctic ice sheet is losing ice at three times the rate it used to, due to warming ocean temperatures.

Warmer water has led to the melting and collapse of ice shelves around the Antarctic Peninsula, where the rate of ice loss has increased by a factor of nearly five. The loss of the protective ice shelves effectively removes the plug that holds back land-based ice, and as a result that ice begins to flow into the sea at a faster rate. 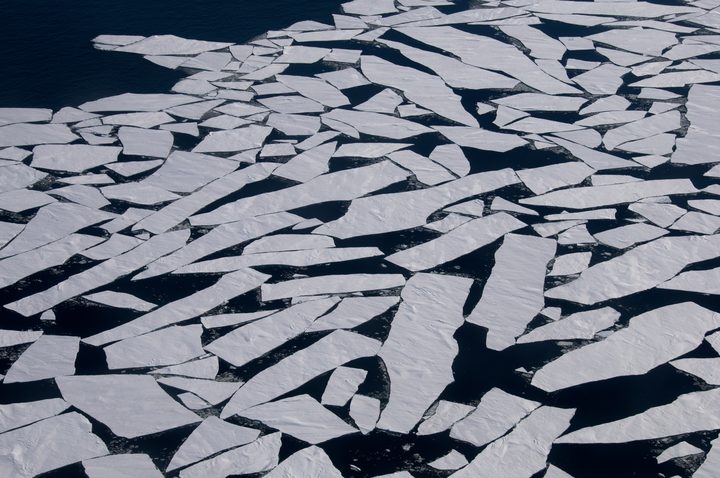 Vernon Squire, from the University of Otago, is an author of a paper called ‘Antarctic ice shelf disintegration triggered by sea ice loss and ocean swell.’

The Antarctic Peninsula has recently seen the dramatic collapse of some large ice shelves such as Larsen A and B, and the Wilkins ice shelf, with enormous icebergs breaking away.

This has led to the “runaway collapse of large areas of ice shelves weakened by pre-existing fracturing and decades of surface flooding,” says co-author Luke Bennetts.

While a number of factors have led to the collapses, the paper says that each disintegration happened when sea ice was significantly reduced or absent, and when ocean waves were large.

Sea ice normally acts as protective buffer that helps dampen large ocean swells created by storms. When there is no sea ice the swells can reach the ice shelves and cause them to flex up and down, enlarging existing fractures caused by warm temperatures and surface melting, and leading to the calving of enormous icebergs.

The paper highlights the important role that sea ice has in protecting the margins of the continent, and points out that its loss can have a significant impact that has not been properly recognised until now. 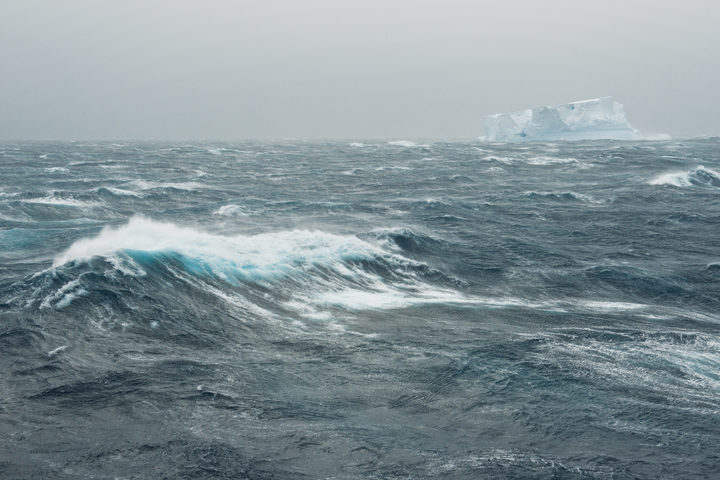 What future do we choose?

Tim Naish, from Victoria University of Wellington, contributed to a Nature Perspective called ‘Choosing the future of Antarctica.’

The authors say that choices made in the next decade will have long-term consequences around the world.

They present two scenarios, considered from the perspective of an observer in the year 2070.

In the first scenario, greenhouse gas emissions remain unchecked, the climate continues to warm, and little policy action is taken to respond to environmental and social factors.

In this scenario, Antarctica and the Southern Ocean undergo widespread and rapid change, with global consequences. There is a dramatic loss of major ice shelves, global temperatures are 3.5°C higher than today, there is sea warming of about 2°C, sea ice retreat, sea level rise and ocean acidification, as well as degradation of the environment caused by unrestricted growth in human use of Antarctica and introduced invasive pests.

In the second scenario, significant action is taken to reduce greenhouse gas emissions, and as a result Antarctica looks much the same as it did in the earlier decades of this century and global sea-level rise remains small.