A computer “baby” at the University of Otago may provide the link between the scientific disciplines of linguistics and neuroscience.

So we have a computer model that simulates a baby in some sense learning a language,” says cognitive scientist and linguist Alistair Knott. “The baby has got sensory motor skills. For instance we have a model of the sensory motor routines which a baby needs to do in order to grab a cup but also to watch someone else grab a cup. 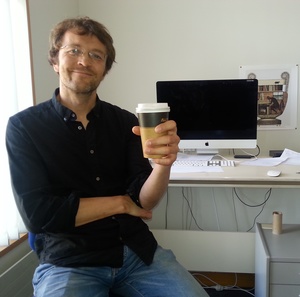 Alistair Knott in his office after grabbing a cup Photo: RNZ / Ruth Beran

““I have to emphasise [the computer baby is] very simple, but if you squint your eyes you can see it acquiring firstly the simple kind of syntax that babies learn at around 18 months. Then later on, at about 2 years of age, the light going on and the baby starting to produce well-formed grammatical sentences,” says Alistair Knott.

The computer model is learning various languages like English, Maori, Japanese and Slovak.

All of these languages, according to the world’s best-known linguist Noam Chomsky from MIT, have similar syntax, even if they don’t look similar on the surface.

Chomsky also hypothesised that babies are born already knowing something about language and just have to hear their mother tongue and input some unknown parameters. This is a concept known as universal grammar.

However, modern neuroscience has shown that there is no area of the brain dedicated solely to language, making it difficult to accept that there is an innate competence for language.

Alistair’s idea is that the syntax of a sentence like “The man grabbed the cup” is related to the sensory-motor process of actually grabbing a cup.

If Alistair’s optimistic idea is true, it would be a game changer. It would bring together the separate disciplines of linguistics and neuroscience.

“Theoretical linguists look at the structure of sentences, and build models that describe and explain the grammar of one language or another,” says Alistair. While neuroscientists study the performance of that action, or watching and perceiving other people perform that action.