Our Changing World for Thursday 21 March 2013 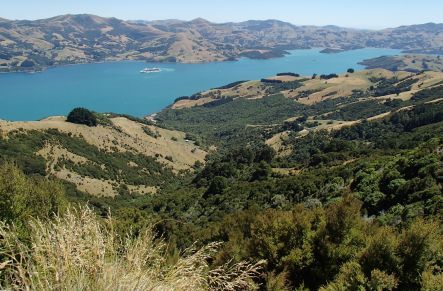 Since 2001 the Banks Peninsula Conservation Trust has been working to protect native forest and wildlife on private land, through private conservation covenants, predator trapping, field days and other programmes. Alison Ballance heads out with the Trust’s Rachel Barker to meet some of the farmers, volunteers and trappers who are part of a vibrant conservation community on Banks Peninsula. She also discovers that a recent tui translocation has been a huge success.

John Thom is a retired vet who leads an active predator trapping group around Akaroa, including the Kaik Reserve on Steve and Pam Helps' farm (images: A. Ballance)

Jill Simpson has developed Fishermans Bay Gardens, a New Zealand Garden of Significance, on the farm she and her husband Richard run, which includes three areas of bush protected under conservation covenants (one of which can be seen behind her). The Department of Conservation's Wayne Beggs (left) and trapper Niall Mugan are involved in an intensive rat baiting operation in the tui translocation release area at Hinewai reserve (images: A. Ballance)

Visionary botanist Hugh Wilson (right) is the long term manager at Hinewai who pioneered the idea that, left to its own devices, gorse would nurture the next generation of native forest. Paul Newport (left) works alongside Hugh at Hinewai (images: A. Ballance)

Retired farmers Kit and Rob Grigg were among the Trust’s ‘founding farmers’ and have become avid tui fans. Marie Haley works for the Trust as the co-ordinator of their Wildside trapping programme on the eastern side of the peninsula. And Francis Helps takes time out from shearing to talk about the trapping programme he and wife Shireen began more than 20 years ago to protect yellow-eyed and little penguins on their Flea Bay farm. 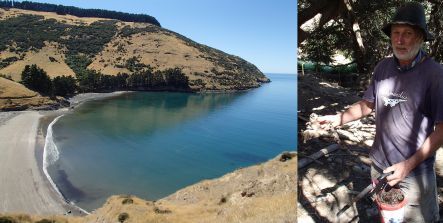 Trapper John Stuart checks traps on a number of properties on the eastern side of Banks Peninsula, including Flea Bay (left)  as part of the Wildside project. He is holding two dead stoats and a bucket of minced rabbit bait  (image: A. Ballance)