Stand up comedy is a scene that boasts that anyone is welcome, but that isn't always the case and people have to fight to get in. Frida DeGuise is Australia's only Muslim, hijab wearing comedian - as far as she's aware.

Her parents immigrated from Lebanon and she grew up in the Melbourne suburbs. She's been a fashion designer, run a fashion label, and worked as a chef. She's also now running a donut shop. If that doesn’t make her busy enough, she also has four children. 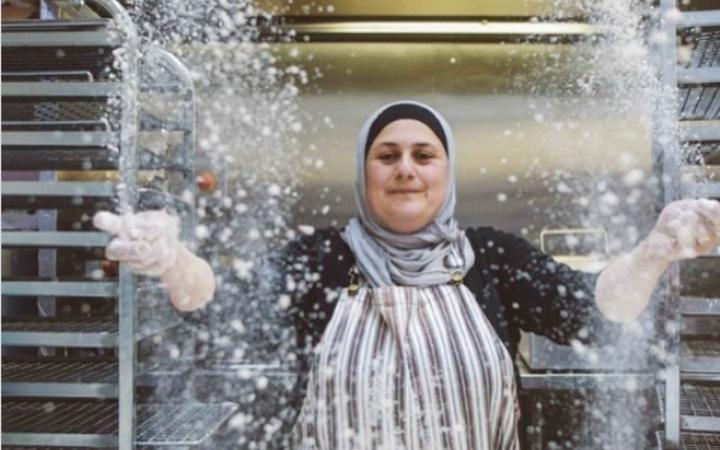 DeGuise has been on the Australian comedy scene for a few years now and is both trying to break down stereotypes, and just tell some seriously funny jokes.

She tells Kathryn Ryan a typical Friday means getting up at 1.30am and getting to work at 2am to make some donuts.

“I’ve left them in the shit so there’s not a lot happening down there. Now I’ve come home and I’m trying to get my kids ready to go to school. It’s crazy.”

DeGuise says she first become interested in doing comedy after becoming depressed in the fashion business.

“It was so depressing and, when things are ugly, you make fun of everything and along my life people had told me I should do stand-up comedy. I’d watched stand-up comedy all the time, never thinking of being a comedian.”

A brush with fate came when her friend was doing a performance and she came along and was making everyone in the room laugh.

“The producer said to me, you should become a comedian, and I said, that’s it, I’m doing it, I need to get out of this fashion industry.

“I was so in the dumps, I was so depressed and it just made me happy, making jokes.”

One of the pushes that got her into comedy was the 9/11 terror attacks. She says that, overnight, attitudes towards Muslims in Australia changed and she felt very isolated.

“I think the comedy was a way I could stand and tell people what I really felt and who I really was and I’m not that person just because I wear a scarf – the person that they think we are.

“I think comedy was a way for people to listen and, when I speak, I’m so crude, I swear so bad and I’m so Australian. My heritage is Lebanese but me in Lebanon, and I’m Australian and I wanted to show people that’s what I am – I just wanted to tell people to piss off man.”

She says that being able to point out that prejudice and show how stupid it was empowered her and she’s received thousands of comments saying that she’s changed people’s attitudes towards Muslims.

She and her family are devout Muslims and she says they pray five times a day and stay away from pork crackling.

“It’s pretty much like we live like everybody else but our prayer and our mosque is very important… people assume we have this great plan to blow up the whole world and we don’t want to connect with non-Muslims.

“They think we think we’re better than everybody else which is so untrue because Lebanese people are so lazy, we can’t even be bothered maintaining those things.”

DeGuise says that her jokes about ethnicity and race are often confronting to people from inner city suburbs and she has been accused of racism.

“I was asking an audience member, you’ve got an accent, where are you from? And someone behind her huffed and puffed and said, that’s a bit rude. I said, you’re Asian, why is that rude, and he said, you can’t ask someone where they’re from.

“There’s so many things you can’t say or do anymore and these people who’re trying to fight racism and trying to stop all this stuff, I wasn’t even being racist, they just have this weird way of assuming that what you say is racism.”

Within the Muslim community, she believes around 2 percent of people don’t appreciate her jokes or think she’s too outspoken.

“But that just gives me more material to write about. Now they’ve realised that I don’t shut up, I’m going to keep going and I am their Muslim comedian.”

With her donut shop being in the centre of the Muslim community, she says people are getting to know her better and becoming more accepting of her stand-up routine.

“But yeah, I copped it at the start. Really badly.”