Music industry revenues are up, but is local music being left behind? 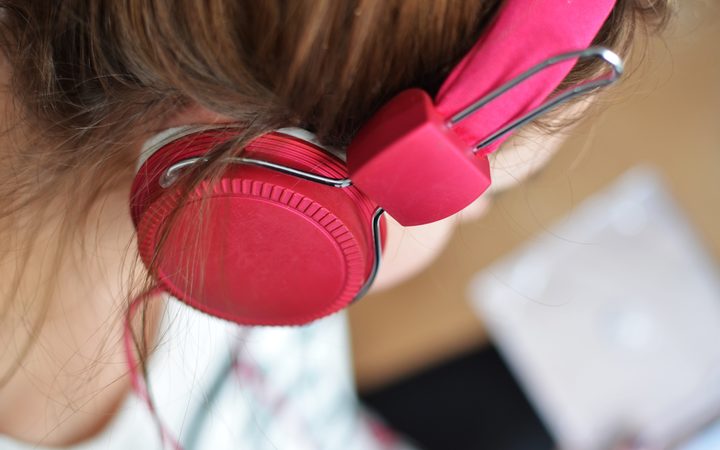 Streaming and downloads now account for more than 70 percent of music revenue, according to latest figures, while physical music has continued its downward trajectory.

Though streaming is returning cash to artists, many in the industry think it's undervaluing music, especially for local acts.

After a sustained period of market disruption - and digital piracy - overall returns are 30 percent below the peak in wholesale revenue of more than a decade ago.

As we've gone through [the transition] from physical to digital downloads to streaming, the industry themselves, the organizations, the artists, managers, the whole infrastructure has had to adapt.

We've seen double-digit growth for the last three years after 15 years of decline. So, there's certainly a turnaround and more buoyancy and optimism in the industry and locally.

What [makes it] harder ... for local artists in this environment, is that there is more global competition and you are on the global stage ... Not that Kiwi musicians ever looked solely inwardly. But increasingly more so, you have to look to the global marketplace to put out your recorded music.

But in saying that, though ... streaming account[s] for about $61 million worth of revenue to the industry locally. Three years ago in 2014, the entire industry: streaming, downloads, physical, radio, every kind of revenue stream amounted to $66 million. It's massively improving and whilst the percentage of New Zealand music ... is small, it is flowing on to the right [places]. 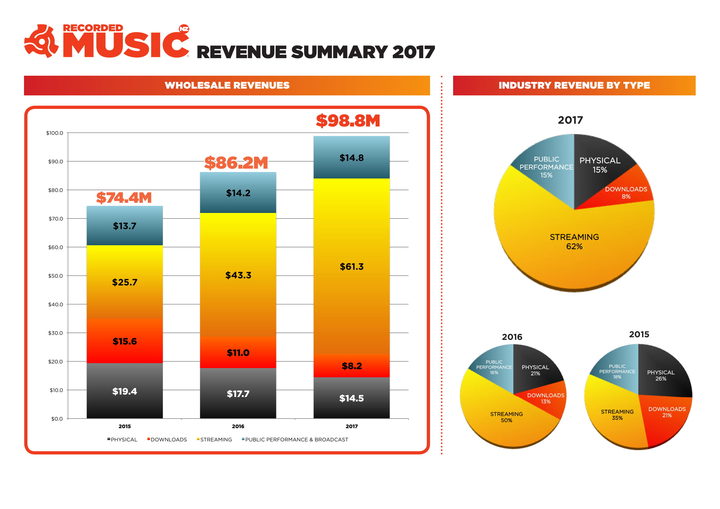 Is New Zealand music declining as a proportion of revenue?

"That is a difficult one to quantify. In radio, the New Zealand portion is approximately between 10% and 20%, depending on which type of station ... With physical music, it's more 10% to 15% New Zealand music. On the digital landscape, it is lower than that, 5% to 10%. That's [because of] ... the vast range of options that are available through a digital platform."

RELATED: How the charts actually work

When we look at promoting New Zealand music then, do we need to think differently about where we put taxpayer dollars [for example] to get exposure for our artists? Do we need to set up our own local streaming service?

I don't think that's the right path. Absolutely not. The [global] streaming services ... operate in New Zealand [and they] do have a New Zealand focus. They don't have New Zealand staff here on the ground, but they are over frequently and they do have some New Zealand citizens in their Australian offices, which is always helpful. And NZ On Air is a fantastic mechanism for supporting the creation and support of local content here in New Zealand."

Airplay quotas that require radio stations to play a certain percentage of New Zealand music don't apply to these streaming services. Are more and more people actually listening to their music this way, rather than through radio stations?

We haven't seen any noticeable change in terms of radio consumption that I'm aware of. You're right. There is a voluntary code for the commercial broadcasters to reach a certain level of New Zealand music and those streaming platforms don't have that same obligation. But in contrast to that, streaming still requires the consumer to choose the music as they please."

Should we be paying more for streaming?

Well, that is a tricky question. My answer representing music rights holders is of course. Let's spend more!

The subscription for streaming services is approximately $12, $13, ... per month. Is that how much you'd spend on CDs or vinyl. Did that equate relative to a year – is it roughly approximate? Are you spending more or less?

Each individual is different, I suppose. With streaming, you're paying for access. Once you stop paying, you don't have the access. So, it's a different mechanism and it's a different way of consumption.

But, what's happening to artists' incomes?

Well, that's right. That's a different way of revenue return or royalty return to the rights owner. So, with streaming, every single stream pays a fraction of a cent back to the rights owners. With the CD model or even digital downloads, the consumer pays once, there's one royalty return, which is bigger, that goes back to the artist. But there's no further flow-on of that.

Streaming sits ... in between a purchase of a physical product or a digital download, and radio. [It's licensed in much the same way as radio], which is pay per use. So, it's a different means of how income comes back to the artist. So, it may have a longer period of time where drips or smaller increments come in, but over a long period of time, as opposed to all at once.

So, we really don't know the bottom line. Is that what you're saying?

Well, ultimately, it's just the different way of the royalties being returned to rights owners. What is true, though, is that the last three years, there's been an absolute boom, I suppose, back into the local market because there's more money being spent on music consumption in New Zealand.

Over that time period from 2002 to about 2014, the industry was in a state of decline in total wholesale revenues. But the last three years have seen double-digit growth and that's driven primarily by streaming platforms and the adoption and uptake [of those] by Kiwis.

Are we seeing less piracy now and more people prepared to pay for product?

I wouldn't say we're seeing less piracy. It's morphed into different methods ... [since] 2001 ... piracy took the form of peer-to-peer file sharing and illegal downloads. So, the digital platforms [which were] in their infancy ... in that period struggled to compete against that weight of piracy ... happening online.

Also, the business was transitioning from selling CDs ... to making ... product available as a digital download. Then in the last three to five years, adapting again to an access model where a music consumer pays for the subscription and then has access to all of the content.