The Age of Bowie 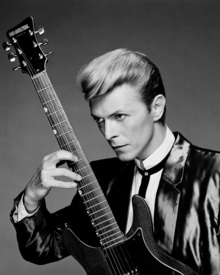 One of pop culture's most significant figures, David Bowie's body of work encompassed not only music, but film, video, fashion, mime, fine art criticism and writing. Over five decades, he created enduring characters from Major Tom, to Ziggy Stardust, Aladdin Sane and the Thin White Duke.

His final album Blackstar was released just days before his death in January this year.

You finish the book with this paragraph that almost suggests, the way he exited with the release of one particular single and  the album, and then his death just days afterwards, suggests yet another transition into another dimension in some ways. It’s almost as if he orchestrated it that way.

I think there was an element of someone who was very much in control of his own image. He wanted to be in control of it at the end, because I think that is a brave thing to confront, but the idea of, what happens to you after you die in the world of rock and in the world of show business? There is a tendency for everyone to scrap over the remains and look for scandal and gossip and look for the worst side.

I think to the end he wanted to be in control of how that happened. I think he literally wanted to turn his death into a work of art. He wanted everything that happened afterwards to be a performance that he was still in control of. So it was both very brave and a very modern thing to do.

If you look at the way that someone like Prince or Michael Jackson dies, it almost immediately becomes scandal and gossip; who is the children? How did he die?

Bowie managed to make it a performance, which sounds sometimes glib to say this, as if no one else can do that, but I think it was something that he’d considered for a long time, how we would remember him. It was very important to him because he had his vanity, he had his ego. He wanted us to remember him in the best possible way; as this astonishing artist.

You mentioned the ego, and undoubtedly it was present, it has never not been present in any pop star. It’s probably essential for them to live the life that they do. What were the other essential elements of the artist in him?

I think he was constantly questing for the new. Unlike a lot of other rock musicians who are continually telling you what you already know, he had an urge to always go further. If he achieved something and it was successful, he would often sabotage that by not turning it into a formula. He didn’t want to be fixed in place.

I think he had a ruthlessness, a craving for artistic and therefore human freedom that entered into the way he made his music. There were these constant changes throughout the 1970s, because just as he was possibly being accepted as one thing, this worried him, that he would be fixed in a box. He immediately changed.

At the time it was mesmerising and so exciting to see what his next costume would be, what his next musical style would be, what his next performance art would be. But I think they were rooted in an artist who was making sense of the world around him through the way that he was presenting himself as a performer and in a sense as a work of art. That was very unusual and we took it for granted at the time, but in hindsight we realised how unusual that was, someone using pop music to also having these experimental, artistic tendencies.

What to make of the various personae, particularly in the 1970s? Yes you can call it an act of creativity, an act of artistry, but was it something else as well?

I think he was filling in the blanks of his personality. He came from a family that was fraught with mental illness and he was always anxious that there was a fine line between creativity and madness. It kind of filtered through most of his work. There was always the sense of madness and the betrayal of madness and what was it like to see the world if you weren’t necessarily stable.

His half-brother Terry who was 10 years older spent most of his life in mental institutions. It was the kind of thing that clouded Bowie all the way through, a sense of fear that it might drag him down, so he would take the most enormous creative risks, and risks with his body and mind if you like, to escape a certain kind of madness. Almost confronting it in the mid-late ‘70s, there was a world when he could have died then. In the middle of it he left remarkable evidence through these astonishing albums of the most vivid… you wouldn’t believe looking at him in 1976, 1977 that he could produce these most extraordinary albums.