The acclaimed classical musician reflects on her journey into the limelight. 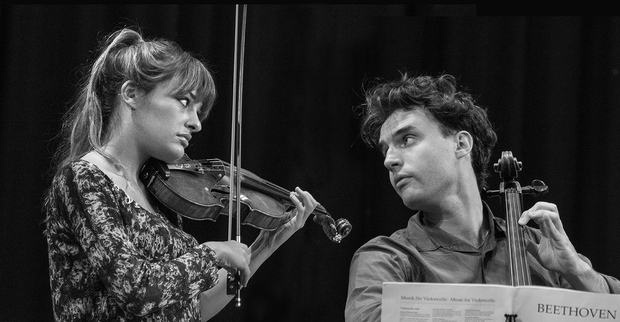 Violinist Nicola Benedetti made history in Britain as an eight year old by becoming the youngest person to lead the National Children's Orchestra of Great Britain. Eight years later, at just 16, she won the 2004 BBC Young Musician of the Year Award, which lead to a lucrative six-album deal from Universal Music.

Now 28, she is a passionate advocate for music education and getting children to learn instruments. She is also currently in New Zealand for a series of concerts with the NZSO, playing Brahms' Double Concerto for Violin and Cello along with cellist Leonard Elschenbroich  – her partner in both life and work.

Nicola, when did you know this was going to be your life – how far back does that go?

I started playing when I was four years old, and I don’t think I ever really had a moment of questioning playing, there was never a penny-drop moment of ‘This is what I want to do’, I just never had the opposite. Quite quickly I was doing local festivals and competitions, and doing well in my grade exams, so it was suggested I audition for the Yehudi Menuhin School.

Your father’s Italian, your mother’s Scottish – you grew up in Scotland. Was classical music a part of your childhood?

Not at all, no. My parents never listened to any classical music before my sister and I began playing the violin. And I only started playing because of my sister; and it was very much a case of us exposing classical music to our extended family.

I would say that within a year or so I really started falling in love with the melodic material that I was playing. I was extremely moved by music very young – at six, seven years old I was crying to pieces of classical music.

You were just eight when you became the youngest person to lead the National Children's Orchestra. Did you just take that in your stride?

I think at that age, you’re so unaware. Everything took me and my parents by surprise, and we just went with it. I was always quite happy to practice, so I think that was a welcome surprise for my violin teacher.

You went to the prestigious Yehudi Menuhin School at age ten. This is a big step – leaving home, going into a professional environment. Is it a real life Hogwarts for musicians?

For the first month or so I was terribly homesick, and then after that everything just becomes about your development as an instrumentalist. I had four hours of individual violin lessons a week, on top of that many hours of practice every day. It’s such an intense focus on consistent development; time goes very quickly. You have to have a tough, strong personality, I would say.