Ambitious moves aimed at giving women a bigger voice within the local music industry have been launched by APRA, which represents songwriters in New Zealand and Australia. 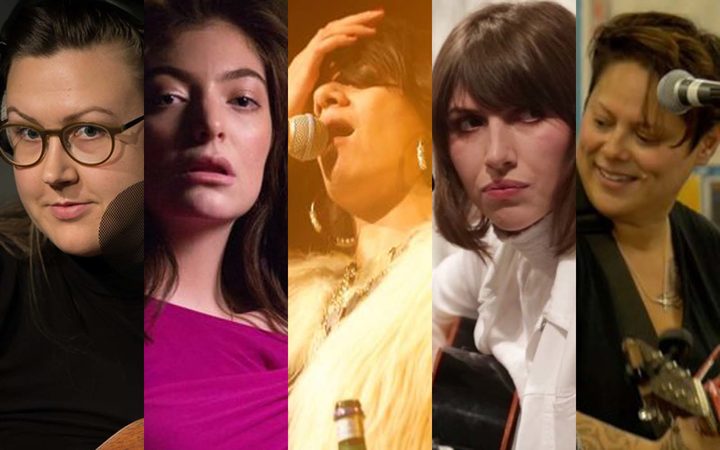 Female NZ musicians (from left) Nadia Reid, Lorde, Ladi6, Aldous Harding and Anika Moa have made huge strides in getting their music out there, but are still heavily outnumbered by the blokes. Photo: RNZ

The moves come after a report revealed only 10 percent of royalties paid by Australia's industry body APRA AMCOS go to women, and only 22 percent of its members are women - slightly less than Australia's official cricket body, which has 24 percent female.

APRA New Zealand spokesperson Victoria Kelly said the figures in this country were only slightly better.

“In New Zealand only 23.8 percent of our APRA members (of which there are around 10,000) are women. The reality is that we work in a male-dominated industry and so we want to create an environment where our female membership increases.”

The initiatives aim to increase female membership 25 percent year on year over three years, while enforcing a strict 40 percent female participation across judging panels, the Ambassadors program and the Songhubs program. APRA is also aiming for women to be at least 40 percent or presenters and performers at all awards, workshops and membership events. 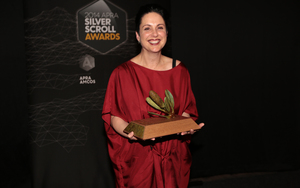 “We want to make sure that in the initiatives we put into the world, that the performances we give, the seminars, the judging panels, all the different things that we do that women are well represented with 40 percent representation in those things.

“This isn’t something that we’re doing just quickly over the period of a year, this is something that is going to be at the heart of how our organisation works, where we prioritise what we see as a deep imbalance.”

APRA Australasian Board chair Jenny Morris said the industry had been waving the flag of inclusiveness for years.

"But the small number of women we organically recruit each year tell an entirely different story. If music is to face its complex technological and legal future with talent from all demographics, then it’s time for a little less conversation and a little more action.”

Gender equality in the music industry was a complex issue, and Ms Kelly said APRA were aware that these initiatives were only the beginning of something that needed to be an industry-wide change in thinking.

“It’s interesting because when you look at the statistics for instance about the number of women represented on stage in music festivals and how outrageously low that percentage is, in some cases it’s less than 10 percent which is astonishing only because the percentage of women in the audience is at least 50 percent.”

If women are rarely heard or seen in visible parts of the music industry, it creates a barrier for aspiring female musicians who are not seeing themselves represented, she said.

“I think that one of the impediments to music for women is that they can’t see a large group of role models that they can aspire to leading the way for them meaning they feel that in many ways they have to break that ground themselves.”

Some areas of the research showed that some areas of the music industry had even lower percentages of women representation, with screen composers only showing 13 percent involvement.

Ms Kelly, who has also been working as a composer for screen for more than 20 years, said she believed there is a degree of unconscious bias, absolutely not deliberate, in the way that the film and media industries worked and the way in which women interacted in those environments, even if it was "absolutely not delibrate"

"For example the screen composing industry is difficult for anybody regardless of gender, but there is safety in numbers.

“This is actually something that APRA in New Zealand works really hard at anyway, because we understand how hard it is for women to have visibility. The important thing about this initiative is that it actually puts a number on what we are aspiring to.”