Reporters stand in storm, confirm it's cold and wet

Most of us waited out this week's winter storm indoors, with heaters set to high. Not so the nation's journalists, who instead sought out the most miserable places in the country, and stood in the middle of them. 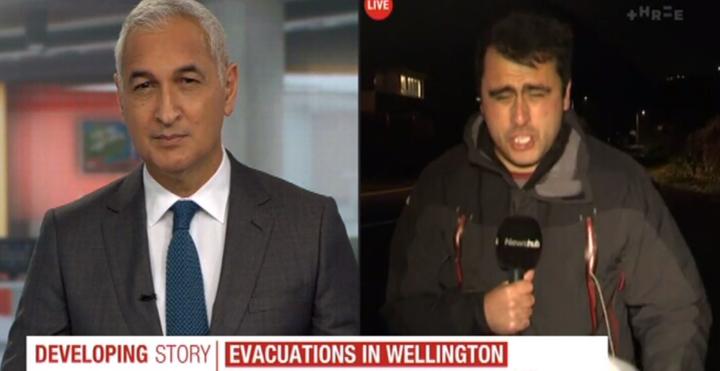 The most-anticipated news of the week was confirmed by 1News reporter Thomas Mead on Tuesday.

"It's definitely snowing," he posted on social media. "It's cold."

It was indeed snowing where Mead was in Canterbury. But that wasn’t all. It also snowed in places like Wellington and Taranaki, while in Auckland it got quite cold.

Most of us dealt with this bad weather in the usual ways: putting extra blankets on the bed, drinking Milo, and in the case of those living in Wellington’s character villas, contracting a severe respiratory illness.

For those working in the media though, a different response kicked into gear.

A snowy veil descended over their minds. In place of words like cold, wet, or windy, a new vernacular emerged. They started to speak the language of wild weather.

"The polar blast closes roads and schools in the south," Newshub at 6 presenter Mike McRoberts said.

"It will be hard to find a place today where the polar blast can be escaped," Newstalk ZB's Niva Retimanu said.

The news reports were clear: the pole was blasting. Gales were lashing. Monster waves were battering. Snows were flurrying.

Any normal person would have taken the hint and stayed indoors until nature calmed down.

Not so the nation’s reporters, who instead beat a path straight into the most miserable places in the country, where they proceeded to film themselves developing frostbite.

On Newshub Caley Callahan earned a compliment from anchor Mike McRoberts after getting through an obviously difficult live cross on Wellington’s windswept south coast.

His colleague Juliet Speedy had to stifle a sniff as she reported live from Canterbury’s Port Hills.

At least the audience could hear what she was saying. Morning Report’s Harry Locke wasn’t quite so intelligible. He stepped outside his car to yell down the line to presenter Susie Ferguson on Tuesday morning.

"We really heard nothing of that, actually," Ferguson replied. 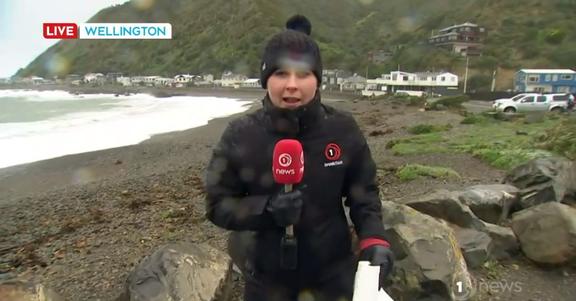 Over on 1News at Midday, Abbey Wakefield was trying to operate in similar conditions to slightly greater success.

"Chris, it's very cold, it's very windy, and it's just started to hail," she told 1News at Midday presenter Chris Chang.

These windswept pieces to cameras are far from isolated incidents. The stand in a long tradition of news organisations sending journalists into the most stormy places in the country to confirm to audiences the weather where they are is in fact not good.

Thomas Mead recounted the time he was buried up to his chest in snow.

Former TV3 producer Phil Corkery admitted to taking the hood off reporter Emma Cropper’s raincoat so she would look “really soaked and miserable” - a trick he said “worked a treat”.

Cropper said Corkery was also behind the time she slipped on ice reporting a weather event.

Meanwhile, former radio reporter Tom Furley said he had fallen down an open drain while covering a flash flood in Onehunga.

There’s possibly a case that sending these reporters out into snowstorms to be blasted, lashed, soaked, ravaged, and drenched is borderline irresponsible.

In any other workplace these incidents would probably breach health and safety regulations.

But wild weather reporting does serve a purpose, even if it’s only illustrating to viewers what would happen if they responded to weather warnings in the most stupid possible way.

That demonstration could come from the journalists themselves, as was the case with the CBS crew taken out by a rogue wave while reporting on 2012’s Hurricane Sandy.

It can also come from the public, as in this memorable report from Newshub’s Sam Farrell, who interviewed a woman out walking in 2018’s Cyclone Fehi.

Covering these stories is also a rite of passage for reporters. Without them, journalism is mostly just reading reports and occasionally ringing people for comment.

When your job can feel like a parched desert, endless and monotonous, sometimes a polar blast can really freshen things up.