An epic doping scandal hit the headlines before the Rio Olympics, but there was mostly silence on the subject once the Games began. Why? Also: how Australian media got it wrong with a startling story about claims of Chinese cheating. The IPC president announcing Russia's paralympians would be banned from Rio. Photo: screenshot

You won't see any Russians competing at the upcoming Paralympics in Rio. The International Paralympic Committee banned the lot of them earlier this month after a huge state-sponsored doping regime came to light.

The International Olympic Committee allowed some Russians to compete in the main Games, but warned they would be under more scrutiny than ever before.

But the media were strangely silent on doping once the games began.

"Looking rather dashing in their bow ties," observed Sky TV's Australian commentator as the grinning, waving  - and smaller than planned - Russian Federation Olympic team appeared at the opening ceremony in Rio.

He didn't mention that all but one of Russia's track and field athletes was banned after one of them - Yulia Stepanova  - blew the whistle on doping.

That was a real true act of courage - and journalism: she was working with a team for a German documentary.

But she may now regret it.

Russian runner on the run

She and her family are in hiding after receiving death threats and her account at WADA was hacked during the Olympics.

"We are not responsible for dangers to which Mrs. Stepanova may be exposed," the IOC chief Thomas Bach said in Rio last weekend. The IOC also refused to allow her to compete independently.

It didn't exactly encourage others to expose corruption in world sport.

Yulia Stepanova told The Guardian she was certain doping athletes from many countries were competing at Rio. 25 athletes who won medals had previously served suspensions for doping violations.

But while British journalists have led the charge exposing corruption in sport in recent times, it seems they’re not always keen to ask probing questions of their own stars.

Confronting a hero - and media fans

British distance runner Mo Farah became a national hero after winning two gold medals in London four years ago, despite missing two drugs tests in the run-up to the games. (He blamed a too-quiet doorbell).

When he won two gold medals again Rio this past week, the British media rejoiced wildly: 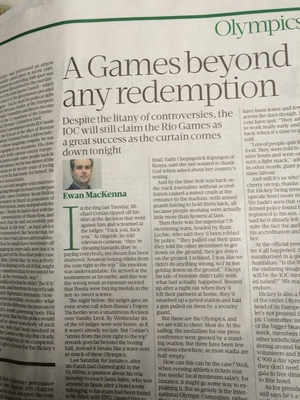 By contrast, The Irish Times said Mo Farah’s medals should be marked “with an asterisk”.

His training partner and two former coaches have been investigated for the use of performance enhancing drugs. Another associate - Jama Aden - was arrested with human growth hormone recently in Spain.

Irish journalist Ewan MacKenna was the only one to raise this with Mo Farah in an otherwise backslapping post-gold medal press conference.

"Press conferences have become a grey area where journalism has . . . been vastly diluted by jingoistic fanaticism and fawning," Ewan MacKenna wrote in The Times.

"It was simply put to him after his incredible victory that for someone who practices and preaches clean athletics why did he feel the need to associate with coaches like Alberto Salazar, John Smith and Jama Aden - all arrested or or under investigation for use of PEDs," he said.

Mo Farah dodged the questions, and later complained that journalists "hate what I do".

Going against the grain

There is a proud history history of investigative sports journalism in Ireland.

Irish reporter Paul Kimmage refused to take Lance Armstrong’s denials at face value and was instrumental in exposing his lies. So was David Walsh, an Irish reporter with the UK's Sunday Times.

@OllieHolt22 I don't think I'm a hero. This is utter nonsense Olly, I have never looked for credit, I did my job. Wish more here would.

"British reporters came up to me and said: 'Thanks for asking that question mate'. I replied: 'Why didn't you ask it? You have the same information as I do." Ewan McKenna told Mediawatch.

Hacking attack on the wrong track

Meanwhile, doping claims were the backdrop to one story the media in the Austrlian media that really didn't check out.

It prompted an angry response in China and reports that Sun Yang's fans took down Swimming Australia's website. 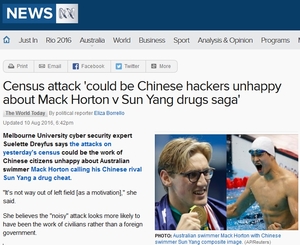 "There’s a highly speculative suggestion that some of the hurt feelings around swimming and doping scandals in Rio may have contributed, if in fact China was responsible, although of course that would be entirely unproveable," said ABC political correspondent Peter Greg Jennett.

"Unproveable" was right. It wasn’t true.