One of the most soulful  musical partnerships of the last decade are with us, THE LADYKILLERS, Suzanne Lynch, Tina Cross and Jackie Clarke! 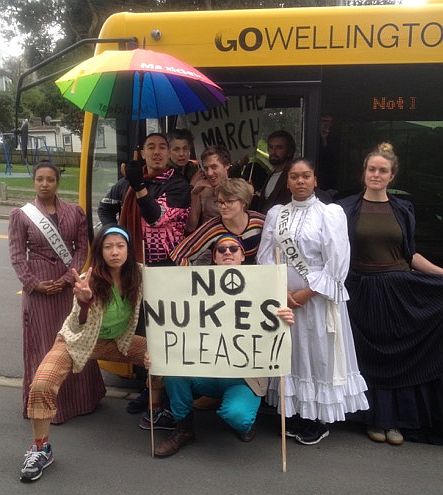 Wellington is celebrating 150 years as the county's capital this weekend. We speak to the artistic director of Barbarian productions who has a team of actors playing political 'agitators' on buses around the city  - celebrating important pieces of legislation that have transformed New Zealand over the past 150 years. So if you're catching a bus to parliament this weekend, don't be surprised if you bump into a Kate Sheppard look-a-like!

At one hundred and three,  Bill Tuckey of Rawene goes for a walk every day to stop  " seizing up" as he puts it. Bill's wife died twenty years ago and he has out-lived two of his six children.

2:30 NZ Reading - How To Make Your First Billion

The final episode of our  drama-documentary  following the fortunes of an internet  start-up  in Silicon Valley.  'Three-Times-Gee'  is still not making any money for its founders  but  today, the young entrepreneurs are setting out to change all that.

What the world is talking about.  With Jim Mora, Bridget Mills, Ella Henry and Wendyl Nissen.