Afternoons with Jesse Mulligan for Tuesday 18 May 2010

Blue Day by MiSex chosen by Paul Dyas of Canterbury.

Vanda Symon is the chair person of the Otago/Southland Branch of the New Zealand Society of Authors. She reviews Island, by Penelope Todd.

Nick Atkinson reviews He Walked In by Goldenhorse's Kirsten Morrell and The Ring by Jamie Lidell.

Noelle McCarthy looks at the internet.

Is Google making us stupid? - that's the basis of a new book called The Shallows.

Six hundred feet below the ice in Antarctica, where there's no light, scientists always believed nothing more than a few microbes could exist. Until now. A NASA team lowered a video camera beneath a massive ice sheet and found a shrimp-like creature and a jellyfish thriving where no one thought life could. Dr Bob Bindschadler of NASA's Goddard Space Flight Center is the world's leading expert on the West Antarctic. He's spent 30 years researching ice sheets, but never expected to find this. He's in New Zealand as a guest of Victoria University's Antarctic Research Centre

A group of fishermen are back home after spending ten days as castaways on a deserted island. The four men were found by a New Zealand Air Force Orion. They had been fishing on an old long line fishing boat, the Gypsy Trader. The men were found on Manuae Island, an island inhabited not with people, but with millions of mosquitoes. We talk to Alfred Morris. 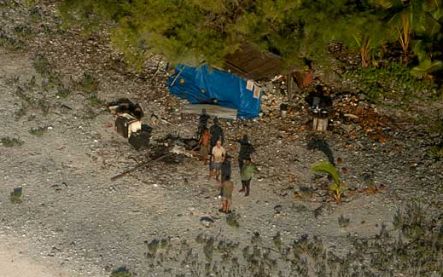 Image supplied by the NZ Airforce.

Coming up this weekend is the 8th annual Maori language music concert, Pao Pao Pao. Ana Tapiata talks to the concert organiser Ngahiwi Apanui about the changes that have occurred over the years.

Our Feature Album is Exile on Main Street by the Rolling Stones, re-released this week to much coverage - an album with poor sales and the brunt of harsh criticism when it was released - but it grew with age.

Temple Gradin didn't talk until she was 3-and-a-half-years old. She screamed. She hummed. She acted out in frustration. When the diagnosis came that she has autism, her parents were told to put her in an institution. They refused. And now Temple Grandin is able to give voice to the experience of millions of Autistic people around the world. With the support of understanding teachers, Temple Grandin earned a PHD and works with the livestock industry designing humane ways to get cows to slaughter. Some of her systems are in place here in New Zealand.

Hee Kyoung Bae completed her Master of Fine Arts at the San Francisco Art Institute in 2007 in painting. Ever since, she has spent time around the globe, studying and exhibiting. Her creative investigation of how the virtual and digital world intermingles with her own feelings of isolation drives the themes of her work.

She is currently heading towards her exhibition as part of an Artist in Residency placement at the Christchurch Arts Centre.

Producer Sonia Yee connects with the artist to get an insight into her exploration of a distant world.

The recent eruption in Iceland has clearly showed what impact volcanoes can have on air traffic. Planes have been brought to a standstill for fear of the potential damage to engines caused by tiny 'glass' particles in the volcanic ash.

New Zealand has its own fair share of volcanoes, demonstrated by the violent eruption of Mt Ruapehu in 1996, which also disrupted air travel here. While there were other impacts in the nearby vicinity, it was generally thought that cities like Auckland and Hamilton were too far away from Mt Ruapehu to be effected.

Not so, according to Victoria University's Rewi Newnham and Kim Dirks from the University of Auckland, as Ruth Beran discovers.

Neil Miller is on The Panel, and with him a guest panellist, a NZ academic visiting home from America for a couple of days, Rob Salmon. We'll ask if swine flu is over-hyped, why parents want their children to drink at all at the school ball after-matches, the value of old stamps and uprooting children from school.