The Vanuatu parliament last night voted to suspend all 22 members of the opposition group, for two sitting days, in what was described by an eyewitness as a uncharacteristically rowdy session of parliament.

The reason given for the suspension was the opposition's boycott of the first session of parliament last week.

The boycott was over the actions of climate change minister Bruno Leingkon.

The opposition said Mr Leingkon came to parliament without isolating himself after entering a hotel where over 100 repatriated Ni-Vanuatu are being quarantined because of Covid-19.

The motion to suspend the opposition was filed by deputy prime minister Ishmael Kalsakau and the minister of public utilities Jay Ngwele, who say the opposition should also pay the cost of convening parliament for the day.

Boycotting parliament is a common opposition tactic in Vanuatu so it will be interesting to see what precedent this suspension sets going forward.

Vanuatu's Opposition has lodged a motion proposing a 50 percent cut to the salaries of political leaders.

Moved by opposition leader Ralph Regenvanu, the motion calls for pay cuts for the Prime Minister and his deputy, the speaker, government ministers, the leader of the opposition and his deputy.

The motion says the Covid 19 pandemic has put Vanuatu's economy on the brink of an unknown precipice, with hundreds of businesses now either closed or scaled back and thousands out of work.

It says state revenue has effectively ceased despite the Government committing about $US43 million to a Covid stimulus package and relief from Cyclone Harold.

If passed the salary cuts would continue until the end of the year.

Meanwhile, the Vanuatu government has given about $US260,000 to the Luganville Municipal Council to rebuild its town hall.

The hall was destroyed in April by Tropical Cyclone Harold.

Luganville mayor Peter Patty received the cheque from the Minister of Internal Affairs Ishmael Kalsakau, who's responsible for the Department of Local Authorities.

The department told the Vanuatu Daily Post the government needs to demonstrate its commitment to rebuilding as a sign for donor partners to come forth and assist. 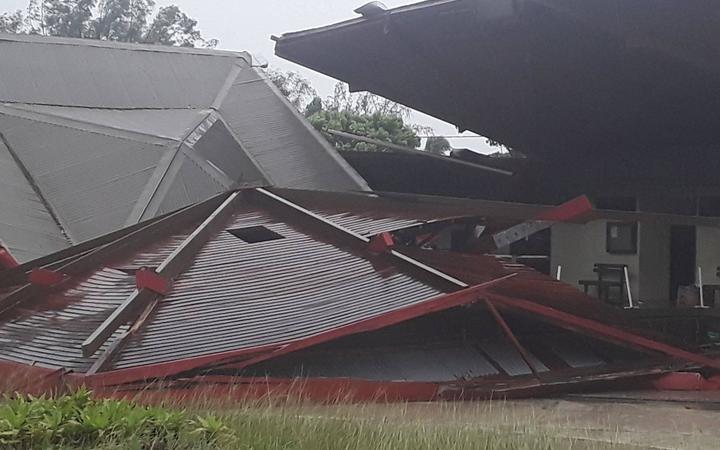