Former All Black halfback Aiolupotea Ofisa Tonu'u has made his international cricket debut for Samoa at the Pacific Games.

The 49-year-old wicket-keeper batsman, who played nine rugby tests for Manu Samoa and New Zealand in the 1990s, played in Samoa's opening round loss against regional heavyweights Papua New Guinea on Monday. 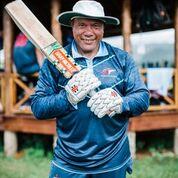 The host nation bounced back to defeat Vanuatu and New Caledonia and Aiolupotea said he always had a passion for both sports.

"Back in the day winter was rugby and it finished in August and in September you got your whites on and you started playing cricket and that's the school I was from."

"You had to do something that was before touch and I have a family that had played a lot of softball and I just was at the time when World Series Cricket started and the uniforms came and I just was privileged to watch that great team in the 80s," he said.

"And that sort of got me watching Martin Crowe go and bat and Ian Smith behind the stumps and (Richard) Hadlee just banging the ball in - it was just awesome - so that's what got me into cricket and I've been playing since I had my first senior game for 1A Church team at 14 and haven't really looked back."

Aiolupotea played alongside former New Zealand rugby and cricket double international Jeff Wilson during his time with the All Blacks and said cricket was a popular past-time amongst the squad, with make-shift bats and tennis balls always on hand to kill time in airports or hotel corridors.

The father of seven and said when his kids started to play cricket 10 years ago he dusted off his bat and wicket-keeping gloves, and made his first attempt to play for Samoa.

"I come and tried to get qualified back in 2010 when you had to do 100 consecutive days here of cricket on the island."

"It was a bit tricky so when the qualifications or the eligibility laws sort of changed and just being able to hold a passport that gave an opportunity so I just thought give it a crack - if I get in cool, if not that's all-right, at least I had a go."

The former Blues and Hurricanes halfback caught the eye of Samoan selectors playing in a charity cricket match between ex All Blacks and New Zealand cricket internationals earlier this year.

And he admits it has been an emotional journey to fulfil another long-held sporting dream.

"I had a bit of a tear walking around in the opening ceremony (at Apia Park) because that was the ground that I played my first test in and to be able to come and do that a few, a couple of years later (laughs) and walking around and seeing just the love and support of our people here is awesome and, just like I always said, it's a huge privilege and an honour to be able to put on the blue and whites again," he said.

Having already beaten defending Pacific Games champions Vanuatu earlier in the week, the Samoan men's team remain on track to qualify for a rematch against the PNG Barramundis in Saturday's gold medal match at the Faleata Cricket Ovals. 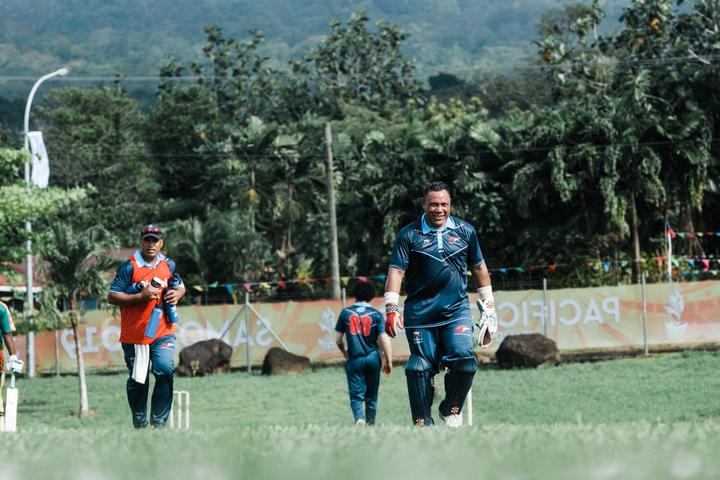