The United States government has officially announced it is pulling out of the US Pacific islands fisheries treaty.

According to the terms of the nearly 30-year old deal with the islands region, the move will take effect in 12 months.

It is likely to hurt budgets of the island countries involved who had benefited from the annual payment of over US$80 million from the US government and industry.

The US State Department this week advised the Forum Fisheries Agency that it had officially communicated to the Papua New Guinea government - which is the depository for the treaty - that it is withdrawing from the treaty.

The State Department's move was presaged last month when the US government and its tuna fishing industry asked the FFA to "take back" 2,000 fishing days that the American fleet had requested as part of an earlier package of over 6,000 vessel days for 2016.

The FFA refused, saying it was a signed agreement that the US should abide by.

Last month, several US-flagged fishing companies said they could not or would not pay their portion of the US$17 million quarterly payment due January 1.

As a result, the FFA has so far not issued licenses for the 37 US vessels, which are either anchored in port or fishing in other regions.

"The treaty has provided a strong foundation for cooperation, not solely on fisheries access, but a wide range of other matters including conservation and management of marine resources, efforts to combat illegal fishing, and capacity building in a range of management and technical areas," said William Gibbons-Fly, the State Department's Director of the Office of Marine Conservation.

However, in a letter to the FFA Director James Movick on Monday, Mr Gibbons-Fly added that "under current circumstances, the treaty is no longer viable for the US fleet."

The State Department, however, left open the opportunity for possibly restructuring the treaty through ongoing discussions with FFA members during 2016.

FFA Acting Director General Wez Norris issued a briefing for FFA members in response to the official US withdrawal from the treaty that outlines a series of options open to islands to address the collapse of the treaty.

A tender has been issued to test the market for selling days unused by the US fleet. 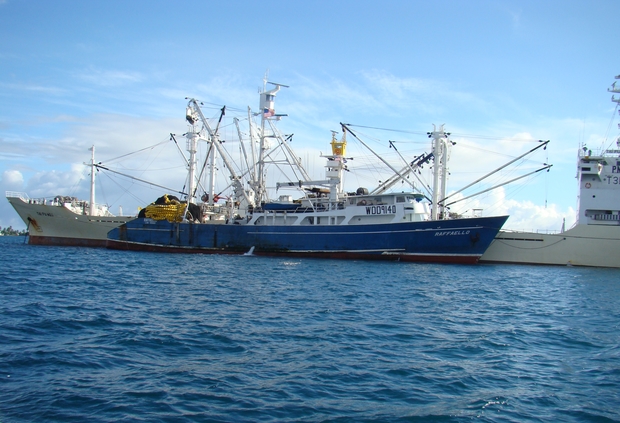 US Raffaello alongside mother ship Tai Fu No1. Photo: Supplied

The FFA has conveyed that it thinks it may be difficult to get all vessel days purchased at the level - over $11,000 per day - that the US fleet agreed to pay.

The regional organisation is urging all members to consider the worst case scenario - no payment and no fishing by the US fleet - when reviewing possible options in negotiation with the US.

FFA members have urged the secretariat to move forward with proposals to address the problem with the US fleet in order to fill the substantial revenue gap left by the pullout.

This year's agreement was to inject US$89 million into island treasuries.

Under the treaty, 15 percent of the financial package was divided equally among all 17 FFA nations, regardless of where tuna was caught.

For smaller islands, such as Niue, this amounted to a sizable portion of their annual government revenue.

The CEo of the Parties to the Nauru Agreement, Dr Transform Aqorau, said the refusal of Pacific islands to take back the 2,000 fishing days from the US fleet last month was "a matter of principle because the US asked for those days, a decision was made."

"The US made a commitment with the agreement reach in Brisbane (last August)," he said.

The FFA is attempting to pull together a three-day consultation with representatives of its 17 members in early February to address fishing day sales issues and a plan of action for the US treaty.