environment life and society
8 May 2020

Two excited young sisters emailed Wellington’s ZEALANDIA Ecosanctuary after they’d identified a bird they'd recorded on their phone while on their daily bubble walk around the bordering suburb of Karori.

The girls say they want the Covid-19 lockdown to go on forever.

They’d recorded the distinctive chattering sound of a red crowned kākāriki, which were introduced to Zealandia in 2011 and are now venturing further afield.

The enforced silence of level 4 has introduced birdsong to many people around the country, and after being cooped up for so long, many of us will want to go bush. 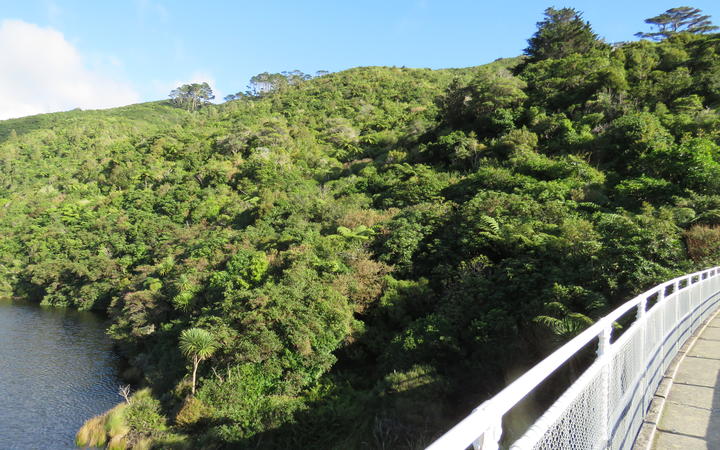 View from the top dam at Zealandia Photo: Lynn Freeman

Eco sanctuaries around the country are banking on it, once they’re able to reopen to the public.

But this won’t be enough, so some are looking at other ways to keep them going. Zealandia has set up a givealittle campaign.

With the support of the Wellington City Council entry to Zealandia will be free for the first few weeks of level two lockdown.

Since closing in March, a skeleton staff has been doing essential work, much of the time is spent on tasks usually undertaken by its more than 600 volunteers. Twenty years ago Zealandia led the way by inventing a fence to keep out the many predators that pose a risk to the flora and fauna within.

Full disclosure – I'm one of them.

We’ve been surveyed and most can’t wait to get back to work, and even take on extra shifts to help out. 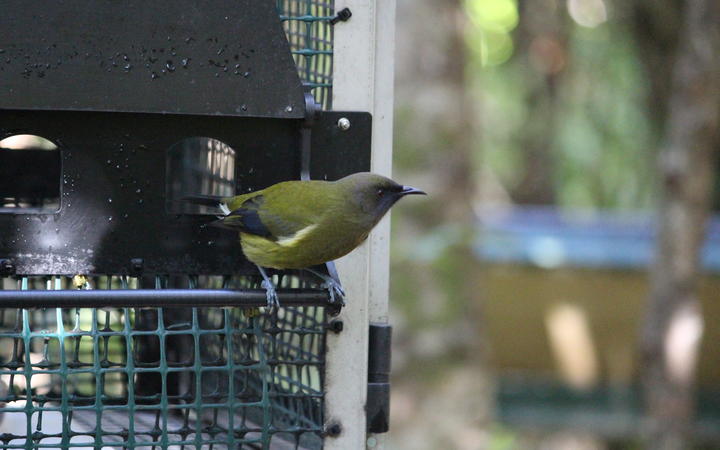 I spent a day at level 3 with lead conservation ranger Ellen Irwin, to find out what it takes to care for the 225 hectare sanctuary, its almost 9-kilometre long fence and what lies within it.

We started in the bird feeding room. Supplementary feeding and cleaning the feeders throughout the valley is usually done by volunteers. It’s going to take Ellen half a day.

Another ranger, Chrissy, took a time lapse video of what just preparing the kākā and takahē pellets, sugar water, cleaning equipment and other tasks involves.

Ellen and I chat after we’ve sanitised our hands. I was a kākā feeder for many years so it’s familiar territory. But I can’t pitch in. There’s no room for social distancing in this confined space.

The logistics of getting volunteers safely back into the bird feeding room is something Ellen and the team are working on, with set times the likely option.

I ask how the animals have reacted to going ‘cold turkey’ - from the peak season with thousands of visitors a week, to a handful of rangers.

The toutouwai / North Island Robins seemed to be the most confused by the empty valley. They count on visitors to kick up leaves and stones as they walk along the tracks, uncovering a veritable feast of insects for the chatty wee birds. 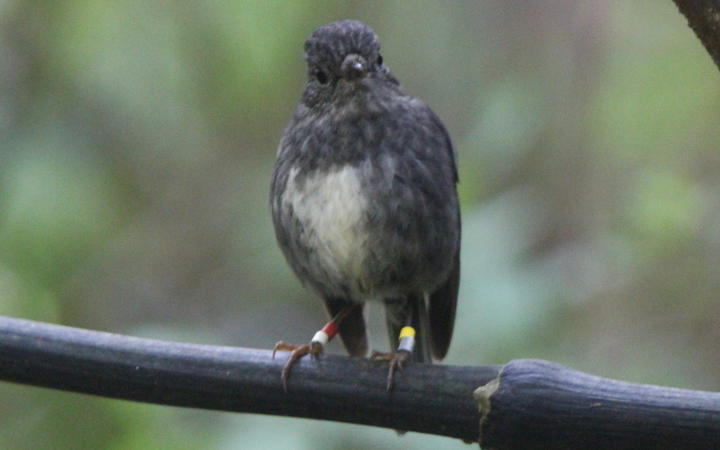 Ellen reflects on the recent storm that pelted the capital. The chainsaw had to be used to clear debris from a few sections of track, but Zealandia got off fairly lightly. This time.

She and the other rangers have walked every single track. There’s something like 33 kilometres of them, most not walked by visitors. That might change post lockdown.  Overseas visitors tended to visit for a few hours. Locals and visitors from other regions might just make the time to really explore the valley. 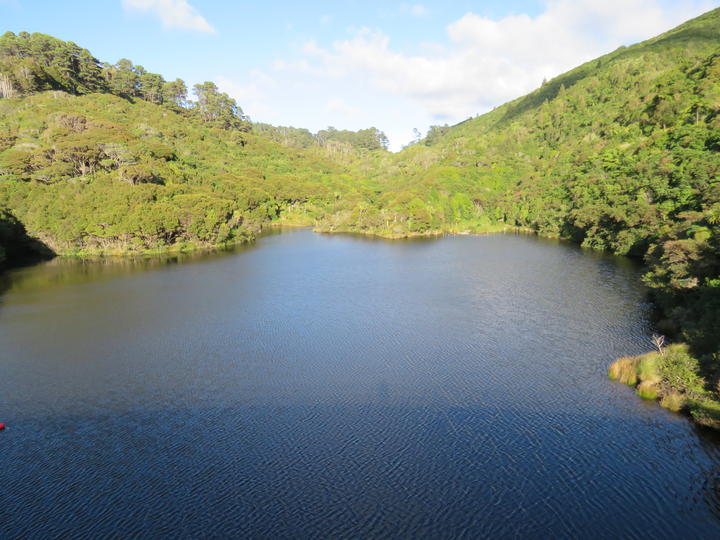 Checking the fence for possible damage is top priority for the rangers. Again, this is usually the work of hardy volunteers – the fence line is very steep in places. Zealandia staff have taken over the role and it’s time consuming but crucial. Any breach could be devastating.

Back to today’s duties. Ellen will be carrying all the food, water and supplies on a quad bike. 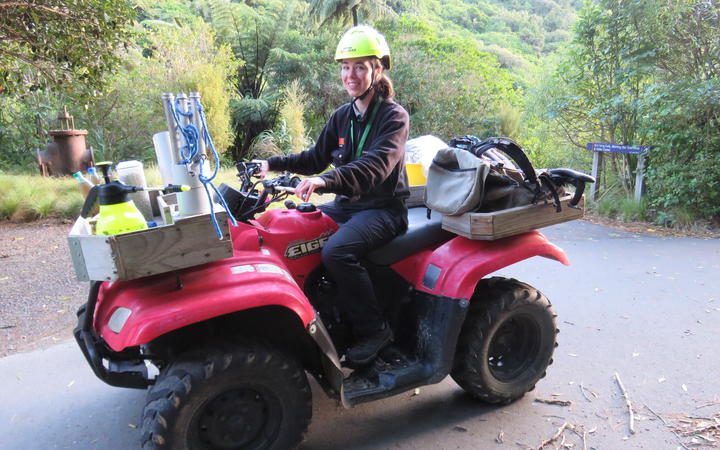 So I start on my 10-minute (give or take) walk to our first stop to feed the takahē pair, Nio and Orbell.

Stepping into the valley took my breath away. Not only because I’m not as fit as I was when able to walk here several times a week.

In the autumnal sunshine the valley glowed, the birds were teasing me by darting just out of camera range, and the sheer sense of space after spending so long in my wee cottage, was overwhelming.

The sound of the quad bike brought me out of my trance. So did the hungry call of Nio and Orbell. They’re used to being fed several times a day and night. Since lockdown it’s been just one big helping of pellets in the mornings. They come up the path the meet us and escort Ellen to the hopper. Both heads flick up the plastic lid and chow down companionably. 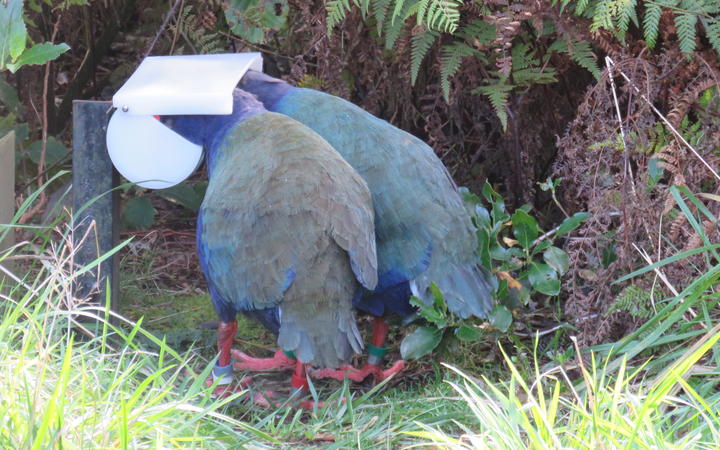 Their thick winter feathers gleam in the sunshine. They spent most of their lives on Mana Island, up the coast, and took a few months to get used to sharing their new territory with people. Have they missed us?

Next on Ellen’s list, the less satisfying task of deep cleaning several sugar water feeders for the valley’s resident hihi/stichbirds and korimako/bellbirds. The loitering wasps are a pain, not literally this time though, Ellen’s pink rubber gloves offer handy protection. A territorial bellbird watches overhead, its olive colouring the perfect camouflage. But you’ll see it if you look closely..... 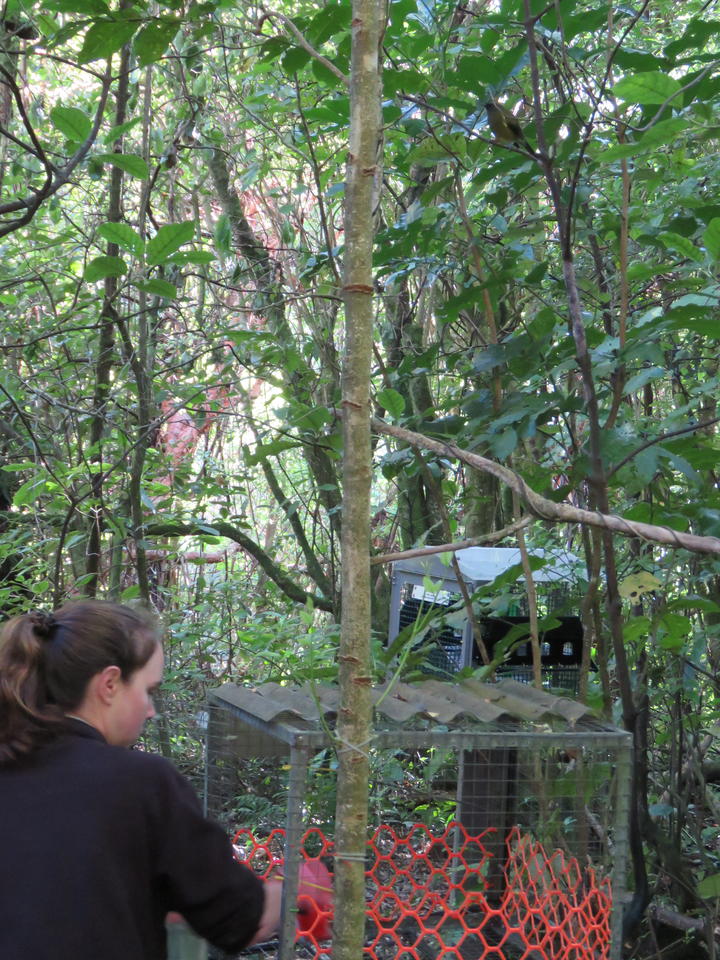 We walk up the steep route to the high dam en route to the next two hihi/korimako feeders. Ellen strides, I puff. I need to "take some photos of the valley from the dam", I say, "you go ahead to the Discovery Centre feeders." It’s a lucky escape for me, they’re up some steep steps.  But the valley is verdant and glowing. 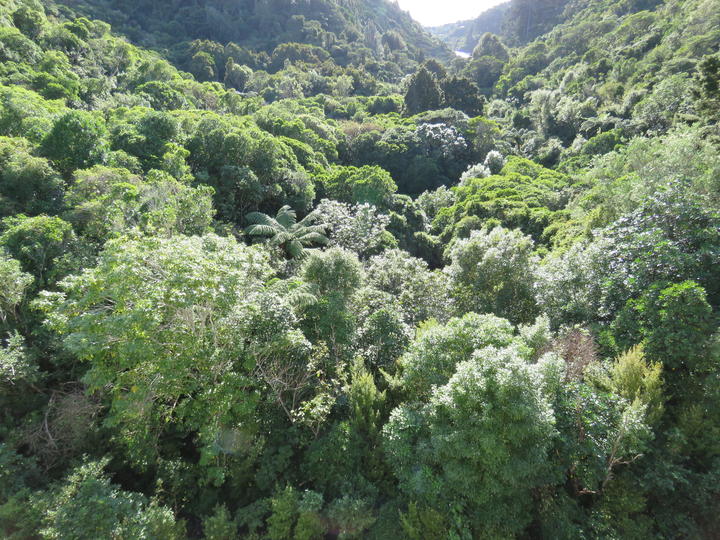 After the recent heavy rain, it’s a slushy walk to feeder number 2 along the Round the Lake track. It’s a favourite with regular visitors to Zealandia. Dense bush and canopy make photography a challenge. I have deliberately left my trusty zoom lens at home. This is work. It’s one of the few ‘in person’ conversations I’ve had since lockdown.

It’s also a novelty for ranger Ellen. She’s been spending most of her days over the past couple months alone in the bush. It’s made her hyper aware of the birdsong. She’s often seen a kārearea/NZ falcon on her travels, and the rare  Black morph North Island fantail, as well as the latest bird to be translocated to Zealandia, the tiny high pitched tītipounamu /rifleman.

She heads up to the steep Turbine Track to the third feeder. I don’t wander far. Time to photograph some birds for this feature. They come to me. 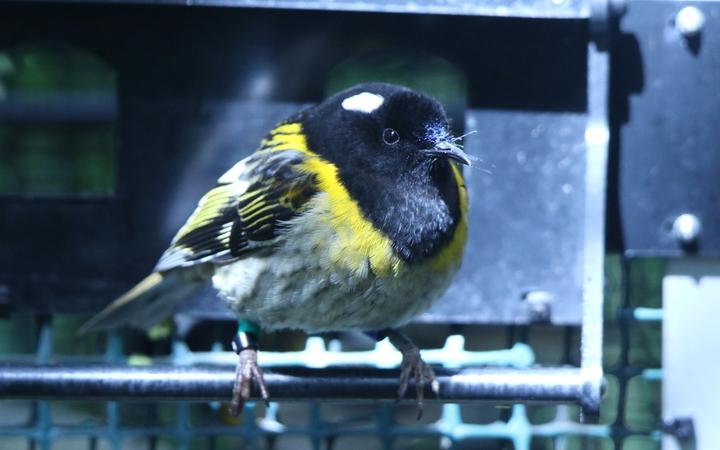 Next on the list – cleaning and topping up the kākā feeders and sugar water. Since being introduced 1064 North Island kākā have been banded at Zealandia, making them one of its biggest success stories. More have hatched here but not all have been banded.  These distinctive and gregarious brown and auburn forest parrots were also quick to reclaim the whole of Wellington city and beyond. I couldn’t imagine Wellington without them now. Then again, I’ve spent hundreds of hours monitoring their nest boxes throughout the valley over the years. Love love love these curious and intelligent critters. Not as smart as their kea cousins apparently, at least according to researchers. 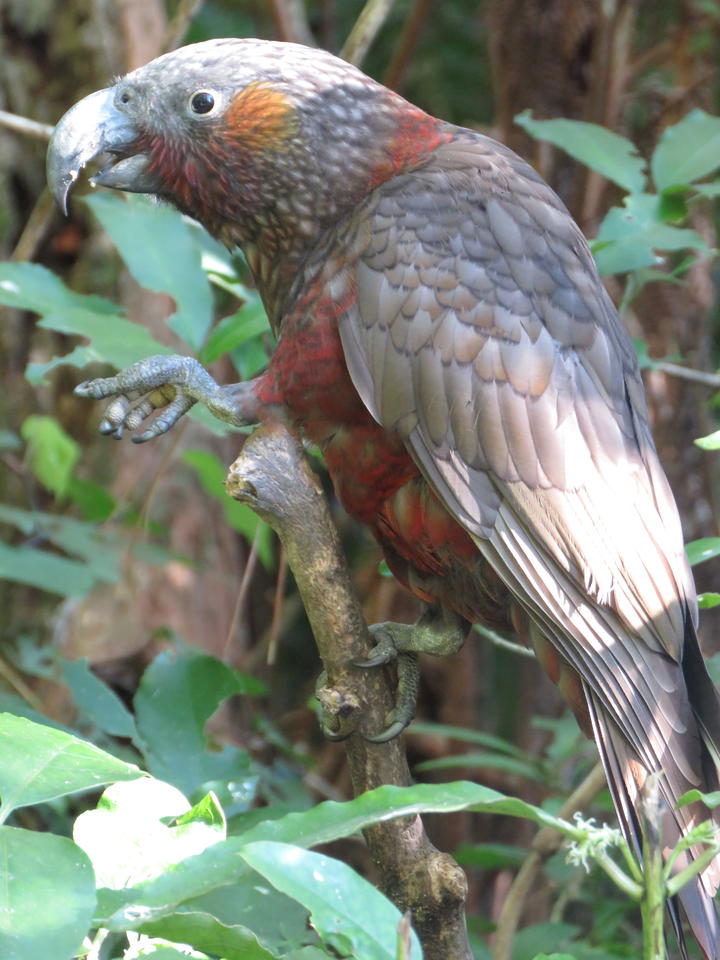 At the feeder at Tui Terrace, we’re visited by one of this year’s chicks. You can tell by the white ring around its eye and the neon pink band it’s sporting. It’s mastered the kākā feeder and chomps on the pellets within. Ellen and I are both gobsmacked by the intensity of its red feathers.

While Ellen rides back to the operations shed, I stroll back via the pontoon. Zealandia’s home to four species of self-introduced shags. Most common is the kāruhiruhi/ pied shag. There are still a few nesting on protruding branches of an old fallen tree in the lower lake. The midday sun is so intense I can’t get a photo of that, but then an inquisitive juvenile kāruhiruhi swims close by. I can’t believe my luck. Water droplets on its feathers glint in the sun. It’ll spread its wings to dry them out when it’s done with its swim. 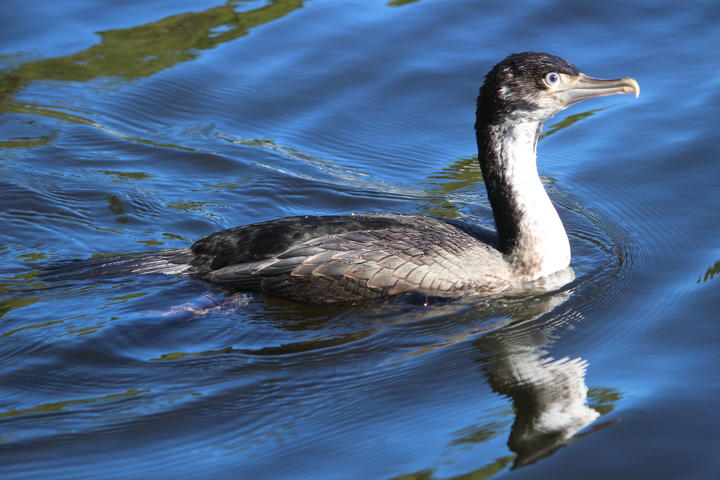 After Ellen’s stacked the pile of equipment to be washed and makes up tubes of food for kiwi for delivery at the end of the day – a tasty combo of oats, dry cat food, oxheart and banana - it’s lunchtime for us.

Now we talk about the afternoon tasks. It centres on checking cameras that are set up to record sightings of mice. They’ve proved impossible to keep out of the valley.  Ruru/morepork can bring them in from outside for a meal and accidentally let them get away. Baby mice can squeeze through the mesh. Mice breed like rabbits. 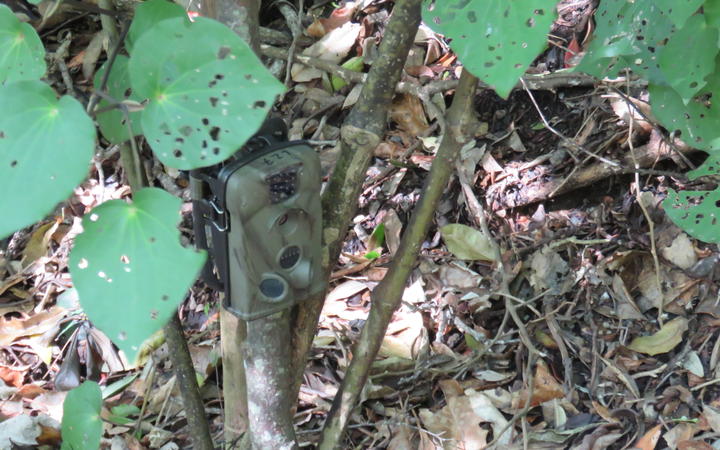 So twice a year, rangers carry out a pest audit so they can work out the mouse hotspots.  These days cameras are set up around the valley, and mice lured into view by an expensive brand of mayonaise.

Ellen will be removing the SD cards from the camera so they can be studied, and putting a generous fresh dollop of the good stuff nearby. 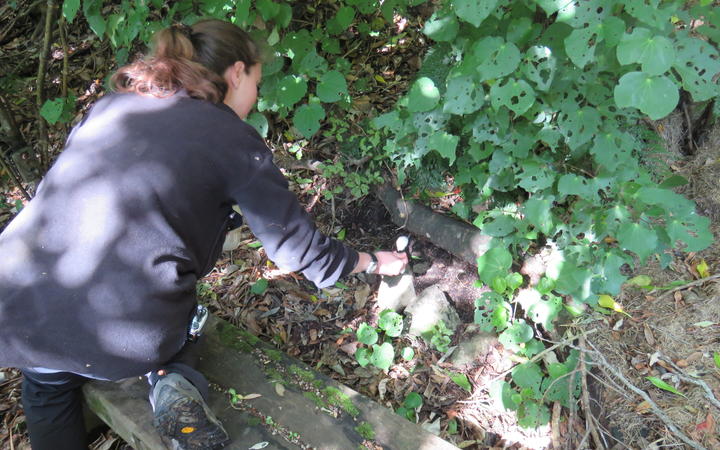 I’ll leave her to wander further into the valley to continue the pest audit. I’d love to stay but she has to open a padlocked gate to let me out.  Ironically, this is exactly where I most needed to be over the past few weeks unnerving weeks of lockdown.  But that's OK. It’s still here. 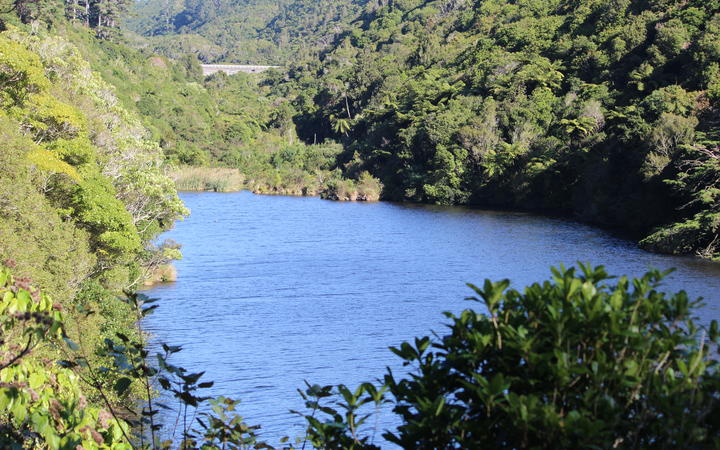 One last glimpse of the valley Photo: Lynn Freeman

Listen to Danielle Shanahan from  Zealandia talk to Jesse Mulligan about what Zealandia's been like without its visitors.